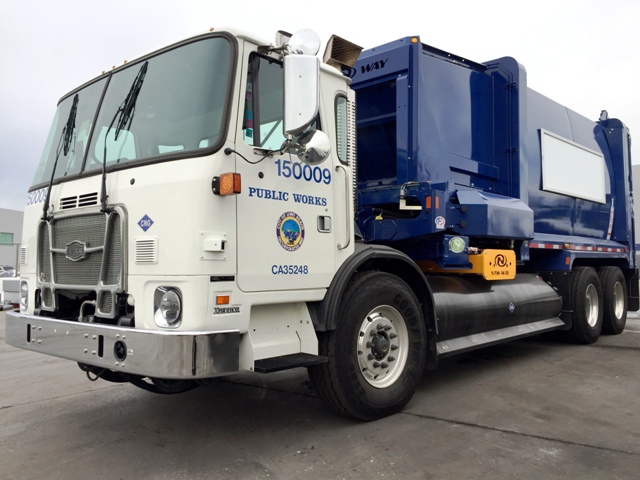 
We work hard at the Office of Sustainability to make Long Beach a more sustainable city, but we’re not the only ones making progress. The Sustainability Spotlight series was created to highlight the great efforts towards sustainability across City departments and community organizations. In this inaugural edition, we’re putting the spotlight on Long Beach’s Fleet Services Bureau for all the progress they’ve made to make City trucks and vehicles greener and cleaner.

The Long Beach Fleet has been working towards cleaner transport since the 1970’s. In 2015 conventional diesel and liquefied natural gas were replaced with renewable diesel and renewable natural gas, which is estimated to save 6,000 tons of carbon emissions per year. The City Hall motor pool is now comprised of 75% alternative fuel vehicles, and the heavy duty fleet is 57% alternatively fueled, excluding exempt safety vehicles. In 2016, 54% of vehicles being purchased by the City were alternative fuel vehicles, primarily compressed natural gas. A new addition to Fleet’s motor pool is one of the first Hydrogen Fuel Cell Vehicles (FCV) available commercially, the Toyota Mirai. At 66 MPG, the Mirai is the most fuel-efficient hydrogen FCV rated by the EPA. In April 2016, Long Beach became the first city in southern California to add this vehicle to its fleet.

Fleet is also implementing a state-of-the-art telematics solution this year on 100% of the powered vehicles in the fleet. The new fuel management system monitors driver behavior to mitigate excessive idling and harsh acceleration in City vehicles to save fuel and reduce air pollution. “Fleet has embraced the Mayor’s goal to make Long Beach a leader in sustainability. We strive to minimize the fleet’s impact on the environment and ensure each vehicle we purchase is evaluated to be the greenest available that will accomplish the mission. It is our goal to have the most sustainable municipal fleet in North America,” Fleet Manager Dan Berlenbach said. Thanks to Fleet’s efforts we are breathing cleaner air and reducing our carbon footprint more each year.

Do you know of sustainable efforts in Long Beach that more people should know about? Email us your nominations for the next Sustainability Spotlight.