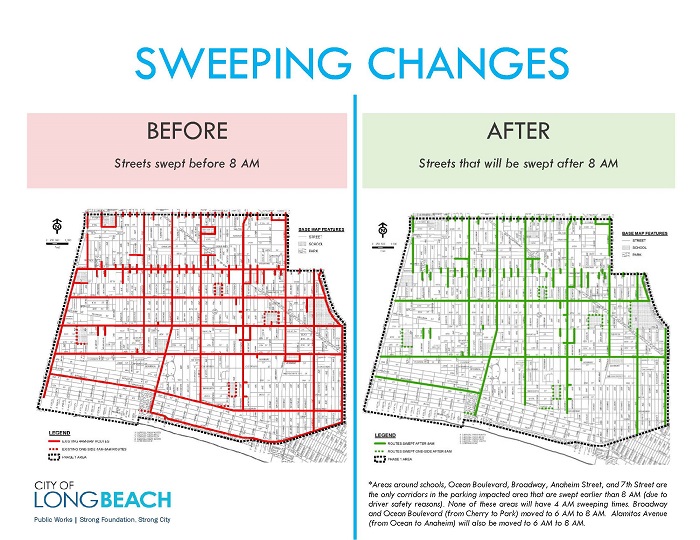 The improvements will be phased in over approximately one year, as thousands of signs will be changed to reflect new street sweeping times. Therefore, it is critical that the public check surrounding signs before parking their vehicle to ensure compliance with any revised parking restrictions.


The improvements to be rolled out over approximately one year will include the following:

• Elimination of all 4:00 am to 5:00 am parking restrictions citywide.

• Elimination of most 4:00 am to 6:00 am parking restrictions in Downtown Long Beach south of Anaheim Street (exceptions include areas around schools).

• In the areas identified as parking-impacted, all routes are moved to a two-hour window (with the exception of 7th street and schools).

• Ocean Boulevard, Broadway, Anaheim Street, and 7th Street are the only major corridors in the Phase 1 parking impacted area that are swept earlier than 8:00 am (due to driver safety reasons). Ocean Boulevard from Cherry to Park will move to 6:00 am to 8:00 am (like Broadway). Alamitos Avenue from Ocean to Anaheim will move to 6:00 am to 8:00 am.

• The most parking-impacted neighborhoods in the City (in the area bordered by Alamitos Avenue, Cherry Avenue, Ocean Boulevard and 7th Street now all have two-hour windows that start after 9:00 am.

Street sweeping is required to keep debris from entering storm drains and polluting our beaches and waterways. The City of Long Beach program sweeps approximately 150,000 miles and collects nearly 11,000 tons of debris each year.