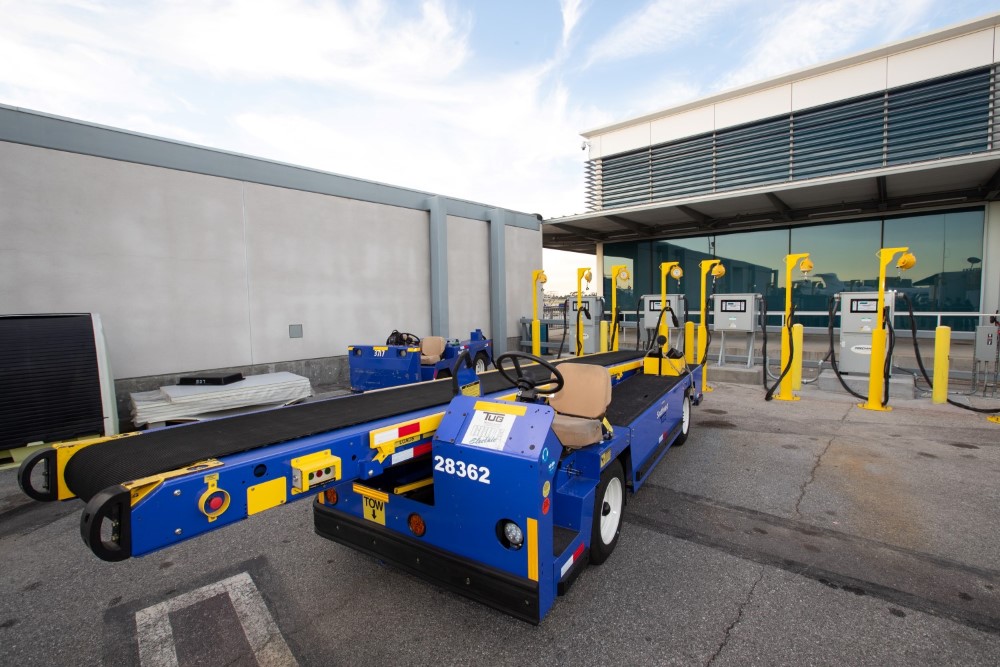 Long Beach Airport (LGB) recently installed 15 electric chargers for ground support equipment, marking a major milestone in its efforts to reduce emissions. Completion of the $1.4 million project means LGB has now achieved 100% electrification for all 11 of its commercial gates.

“These new electric chargers are an important step towards a carbon-neutral airport,” said Mayor Garcia. “Long Beach Airport is leading the way on sustainability by making important investments in reducing our carbon footprint.”

“We are excited about the air quality improvements that will result from these new charging stations,” said Airport Director Cynthia Guidry. “This is a team effort with our airline partners, who are making an investment in ground support equipment that is all electric.”

In 2018, the City Council unanimously approved an item, sponsored by Mayor Robert Garcia and Councilwoman Stacy Mungo, that requested that the City develop a plan to lead the nation on sustainability for airports and to work with airlines serving LGB and other partners to become an incubator of clean tech in aviation, with the goal of becoming a carbon-neutral facility. The comprehensive AQIP, which includes the new electric charging infrastructure, is a cornerstone of those efforts.

As an airport surrounded by neighborhoods, LGB continues to balance the need for commercial air transportation facilities and their associated economic benefits with a strong commitment to environmentally responsible operations.

Founded in 1923, Long Beach Airport (LGB) is the oldest airport in California. A new passenger concourse opened to the public in 2012 and has since earned extensive praise for its modern design and architecture, local eateries and easygoing travel experience. Recently, Sunset magazine awarded LGB with a Best of 2017 Travel Award. In addition, USA Today and 10Best.com recognized LGB for Best Airport Dining in their Readers Choice poll. LGB offers non-stop service to several U.S. cities while supporting a healthy general aviation community with over 300,000 annual operations. The airport is also a source of substantial economic activity and employment. LGB generates $1.6 billion and 10,000 jobs in total economic activity, while the broader LGB Aviation Complex generates $8.6 billion and supports 46,000 jobs. LGB is a self-supporting enterprise of the City of Long Beach and does not receive local tax dollars. The Airport prides itself in preserving its esteemed historic legacy and maintaining a safe, sustainable, and environmentally responsible operation. For more news, pictures, videos and announcements of what's happening, "Like" us on Facebook, or follow us on Twitter @LBAirport and Instagram @lgbairport.