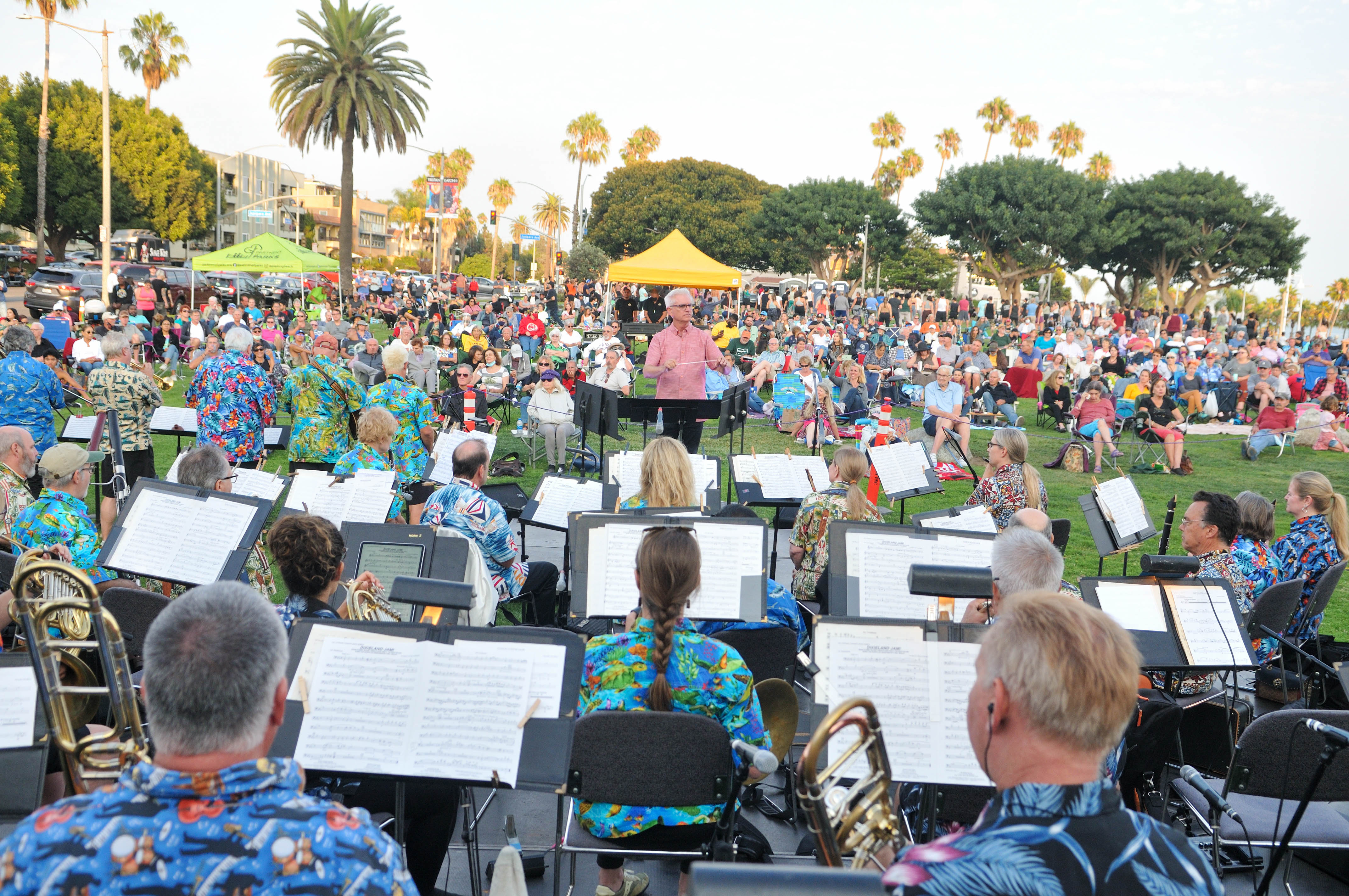 Long Beach, CA – The Long Beach Municipal Band will celebrate their 113th season this year with free outdoor summer concerts in Long Beach parks, from June 28 through August 5, 2022, with a different theme every week.

“Our Municipal Band is one of the best things about summer in Long Beach,” said Mayor Robert Garcia. “We have the longest-running municipal band in the country and these concerts provide a great chance for neighbors and families to gather for relaxing evenings of picnicking, entertainment and great music.”

Residents can enjoy performances of the Long Beach Municipal Band on the dates listed below. All concerts begin at 6:30 p.m. and are free.

Week 1 (June 28-July 1): “United We Stand” – A salute to American freedom through music. These patriotic favorites will awaken national and community pride. The Studio Band will close each evening with the popular vocalist, Meloney Collins.

Week 2 (July 5-8): “Give My Regards to Broadway” – Enjoy magnificent Broadway music that has dazzled show audiences for decades. Each masterpiece is certain to bring back fond memories of music that has shaped our lives. The evening will conclude with the exciting debut of vocalist, Crystal Lewis.

Week 3 (July 12-15): “Legends of Song” – Enjoy musical tributes from singing sensations like Sinatra, Streisand, Presley and more, with music that will cater to everyone’s taste. Vocalists Nicole Kubis and Meloney Collins will team up with the Studio Band to pay tribute to the legendary, Barbara Morrison.

Week 4 (July 19-22): “Let’s Dance” – Bring your dancing shoes to enjoy these toe-tapping tunes. Conductor Kurt Curtis has selected an array of dance music for all appetites. From national to popular and ceremonial origins, dance music is as enjoyable to hear as it is a challenge to play. Fan-favorite Tony Galla returns with the Studio Band as the featured jazz artist.

Week 5 (July 26-29): “Cinema Classics” – The Long Beach Municipal Band will perform the music that adds flavor to the movies. Come… close your eyes and be transported into your favorite cinema classics through the scores of great composers such as John Williams, Alan Menken and Jerry Goldsmith. The uniquely talented Mark Kopitzke joins the Studio Band for this fun-filled week.

Week 6 (August 2-5): “Ragtime, Dixie, and All That Jazz” – America’s contribution to the world of music – Jazz! The birth of American Jazz began in the late 1800’s with a new rhythmic style called Ragtime. This week will explore three great traditions of American music with Ragtime, Dixie and All That Jazz. The Studio Band, along with vocalist Nicole Kubis, will close out the 2022 Summer Season with style!

About the City of Long Beach
Home to approximately 470,000 people, the multiple award-winning and innovative City of Long Beach offers all the world-class amenities of a large metropolitan city while maintaining a strong sense of individual and diverse neighborhoods nestled together along the California coast. As a full-service charter city, Long Beach is home to the Queen Mary, Aquarium of the Pacific, several museums and theaters, a highly-rated school district, Long Beach Airport, the Port of Long Beach, as well as many award-winning City departments such as Health, Parks, Recreation and Marine, Development Services and more. The City also has a highly respected university and city college, two historic ranchos, five hospitals, five golf courses, 169 parks, miles of beaches, marinas, bike paths, and a Bike Share program.