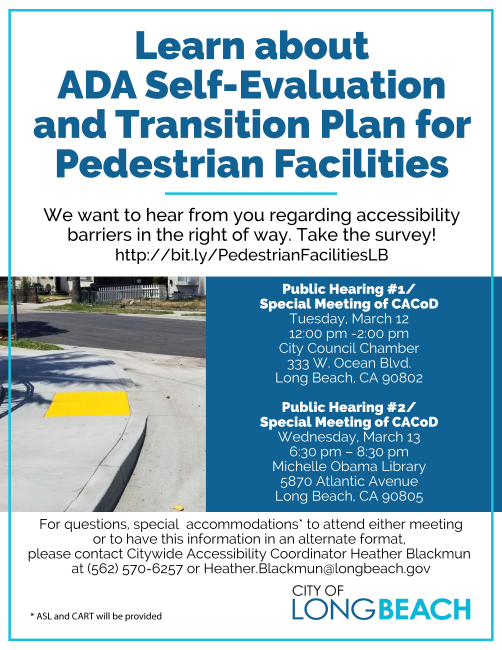 The community is invited to public hearings hosted by the City of Long Beach’s Citizen’s Advisory Commission on Disabilities (CACoD). The hearings will be conducted on March 12, 2019, at noon, in the City Council chamber and on March 13, 2019, at 6:30 p.m., at the Michelle Obama Library, 5870 Atlantic Ave, Long Beach, CA 90805. Attendees will be presented a summary of results of the City’s American with Disabilities Act of 1990 (ADA) self-evaluation for pedestrian facilities. The same information will be presented at both hearings.

In addition to attending one of the hearings, the public is encouraged to fill out a survey that is available at the following link: http://bit.ly/PedestrianFacilitiesLB.

“I encourage community members to come out to our upcoming public hearings as well as take the survey on pedestrian facilities in Long Beach because your input is valuable to us,” said Mayor Robert Garcia. “Our Public Works and Accessibility Teams are always looking for ways to make this city a safer place for all.”

The primary purpose of the hearings is to receive public input regarding locations that are currently barriers to their access as defined by the ADA. The first meeting on March 12, will be live-streamed. Additionally, American Sign Language and Communication Access Realtime Translation (CART) will be provided.

In accordance with the ADA, the City has completed an updated self-evaluation for pedestrian facilities. A citywide field assessment was conducted using a third-party consultant to identify various barriers to safe and equal access to pedestrian facilities in the rights-of-way. After reporting findings to the public and soliciting input, the next step is to prioritize improvements over the next several years, as part of the City’s updated transition plan.

About the Americans with Disabilities Act Division

The Americans with Disabilities Act (ADA) of 1990 provides a clear and comprehensive national mandate for the elimination of discrimination against individuals with disabilities, and to bring persons with disabilities into the economic and social mainstream of American life. The City of Long Beach is committed to complying with both the intent and the spirit of the ADA. The City of Long Beach does not discriminate on the basis of disability in employment or in admission to, access to, or operations of its programs, services, or activities. A Citywide ADA Coordinator has been designated to coordinate and carry out the City’s compliance with nondiscrimination requirements of Title II of the ADA. For more information, please visit http://www.longbeach.gov/citymanager/ada/

About the Citizens Advisory Commission on Disabilities (CACoD)

CACoD consists of community members from the City of Long Beach and representatives from public and private agencies, which provide services to the disability community within the City. CACoD’s purpose is to advise the Mayor, City Council and City Manager on concerns affecting the disability community. For more information, please visit http://www.longbeach.gov/citymanager/ada/cacod/.