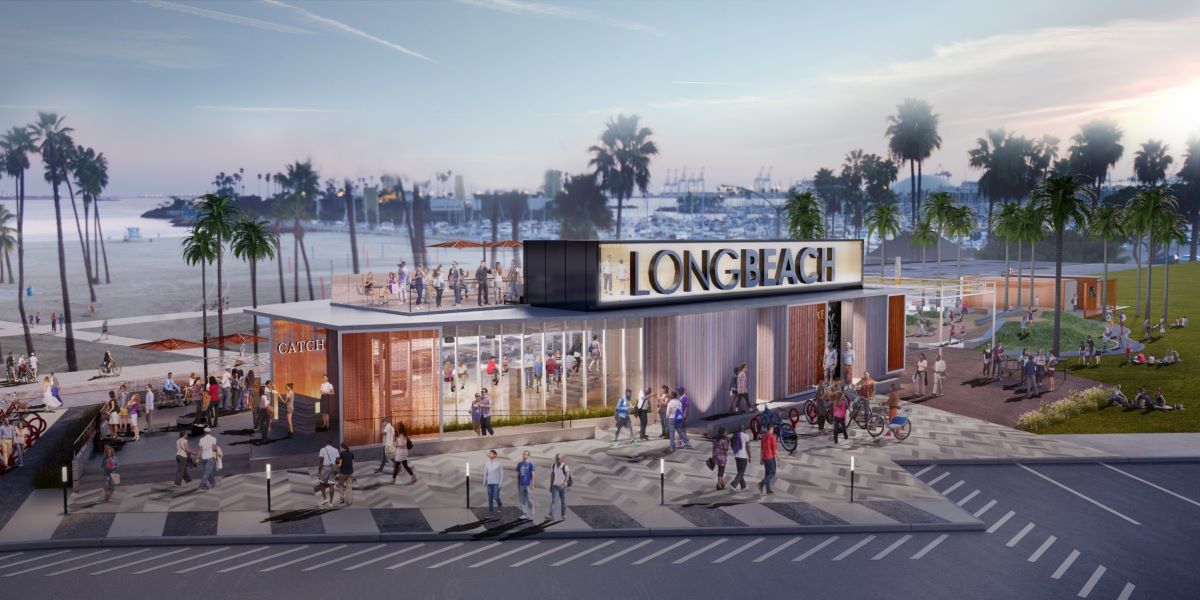 The City of Long Beach will break ground on a new modern café and concessions area at 11 a.m. on Thursday, August 1. The concessions stand, located just east of Shoreline Drive and south of Ocean Boulevard, will open in the summer of 2020 and is designed to have a promenade-like feel with picturesque beach views and added amenities.

“As part of the City’s 8 by 28 initiative, the new beach concessions stands will provide new and exciting features for residents and visitors to our coastline,” said Mayor Robert Garcia.

The existing 2,200 square-foot concessions stand and restroom has been partially demolished to make room for a new and improved 4,240 square-foot café and concession duo. The new, two-story building will offer guests a rooftop deck to maximize beach view, and a large outdoor deck will wrap around the building where a concession window will offer more “grab and go” type snacks to guests.

“The new Alamitos Beach concessions stand will be a spectacular addition to our beachfront,” said Councilmember Jeannie Pearce. “The array of dining options in our new concessions area will make visiting the beach more convenient for everyone.

The expansive Alamitos Concessions area will also include additional amenities, such as:

The Long Beach Public Works Department strives to operate, preserve, and enhance the City's physical infrastructure and transportation systems, as well as preserve the upkeep of the cityscape with a robust refuse and recycling service that serves more than 120,000 residential and commercial customers. The Department provides a variety of community services including the repair, rehabilitation, and general upkeep of City streets, trees, sidewalks, and City structures. Public Works also provides emergency support services throughout the City. Visit us at http://www.longbeach.gov/pw/, like us on Facebook, and follow us on Twitter and Instagram.

The Long Beach Parks, Recreation and Marine Department (PRM) is one of the premier parks and recreation departments in the country, is consistently recognized for excellence in management practices and programs, and has received the national Gold Medal Award four times. PRM operates 170 parks with 26 community centers; two major tennis centers; an animal shelter; one of the busiest municipal golf systems in the country with five courses; and the largest municipally operated marina system in the nation with over 3,200 boat slips. More than 3,200 acres are developed for recreation. The Department offers approximately 2,400 contract classes (fitness, health, enrichment) to people of all ages (newborn to senior) every year; after-school programs at 26 sites during the school year; and summer programs for youth 5-12 years old. Other unique sites include multiple community gardens, a municipal cemetery, more than 38 miles of bike trails, 10 dog parks, and eight skate parks.