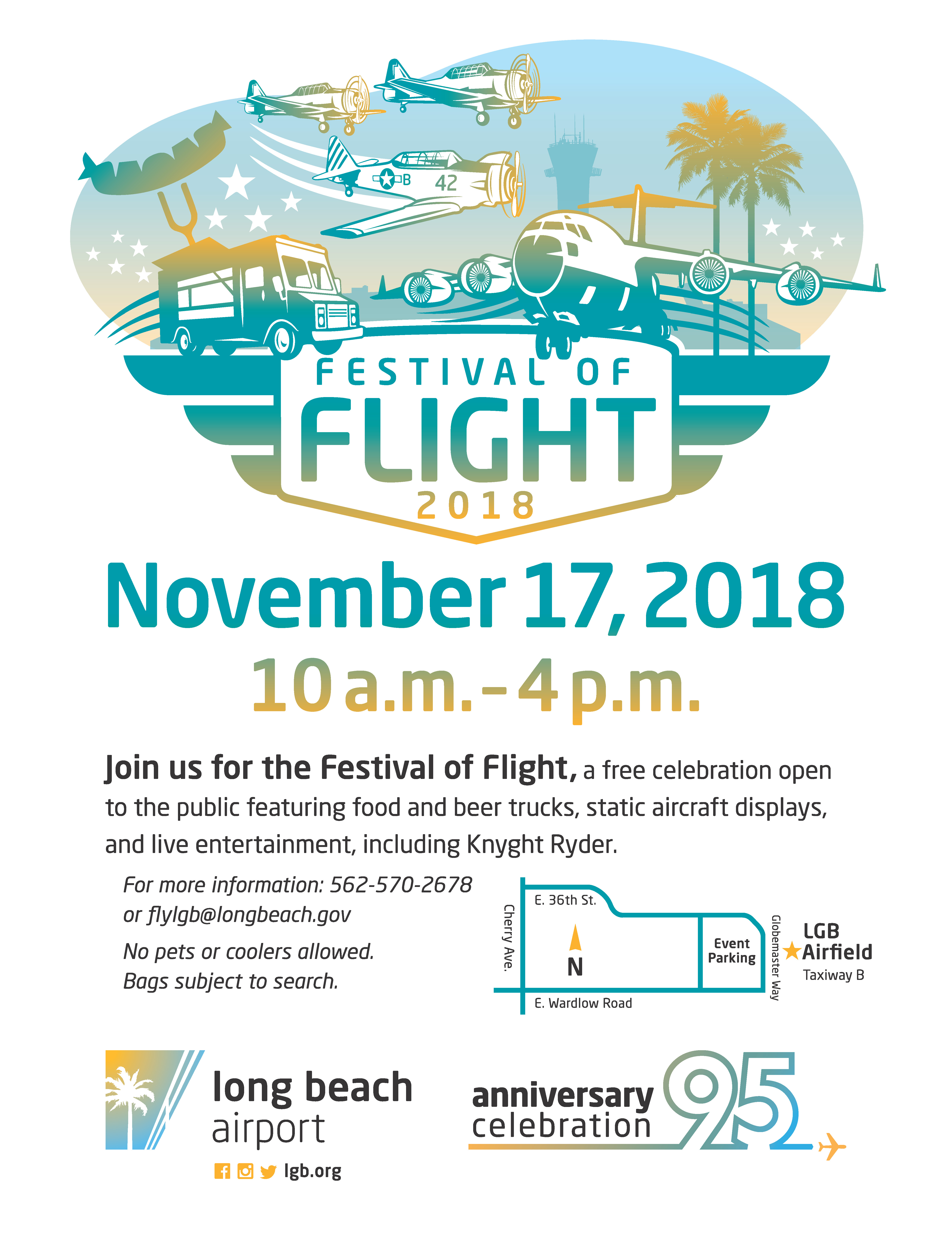 This year, Long Beach Airport’s (LGB) annual Festival of Flight will mark the start of a year-long celebration of the airport’s 95th Anniversary. The event, scheduled for Saturday, November 17, 2018, from 10 a.m. to 4 p.m., is the largest free community event of its kind in the area with a variety of aircraft on static display, live music and entertainment, food trucks and a children’s activity area.

“One of the many great things about our city is its role in the early history of aviation,” said Mayor Robert Garcia. “We are proud that Long Beach Airport is California’s oldest municipal airport, and this year’s Festival of Flight will be more special than ever as it gives the community the opportunity to celebrate this distinguished milestone.”

Last year’s event drew approximately 10,000 people throughout the day, and thousands more are expected at the Festival again this year. The event takes place on Taxiway B, located on the west end of the airfield at 3590 East Wardlow Road. Free parking will be available at the corner of East Wardlow Road and Globemaster Way.

“Long Beach Airport’s Festival of Flight celebrating the airport’s 95th Anniversary promises to be a memorable event,” said Councilwoman Stacy Mungo. “I encourage everyone to bring their family and friends to learn about the airport’s history and why it has been and continues to be such an important asset for our city.”

Highlights of the festival include:

“Long Beach Airport has reached quite a unique milestone among airports to be commemorating its 95th anniversary,” said Airport Director Jess L. Romo, AAE. “On behalf of Long Beach Airport, we are honored to preserve this legacy and share this celebration with the community.”

Attendees are advised to bring water, wear sensible shoes and be prepared to be outdoors in the elements.  Coolers and pets will not be allowed, and bags will be subject to search. Service animals will be permitted. Attendees are encouraged to consider the environment and use public transit, alternative modes of transportation, or carpool if possible.

The hashtags #LBFestivalofFlight, #LGB95, #LongBeachAirport, #LGB, and #AvGeek will be used to promote the event on social media. For more information, those interested can follow Long Beach Airport on Facebook or visit www.lgb.org.

Founded in 1923 as the first municipally-owned airport in California, Long Beach Airport (LGB) completed a revitalization in 2012 to update its facilities. A new passenger concourse opened to the public and has since garnered extensive praise for its modern design and architecture, local eateries and easygoing travel experience. Recently, Sunset magazine awarded LGB with a Best of 2017 Travel Award. In addition, USA Today and 10Best.com recognized LGB for Best Airport Dining in their Readers Choice poll. LGB offers non-stop service to several U.S. cities while supporting a healthy general aviation community with over 260,000 annual operations. The airport is also a source of substantial economic activity and employment. Long Beach Airport and its tenants generate more than $10 billion and 45,000 jobs in total economic activity to the Long Beach region with an additional $1.1 billion in tax revenue at the federal, state, and local levels. Long Beach Airport prides itself in maintaining a safe, sustainable, and environmentally responsible operation. For more news, pictures, videos and announcements of what's happening, "Like" us on Facebook, or follow us on Twitter @LBAirport and Instagram @lgbairport.