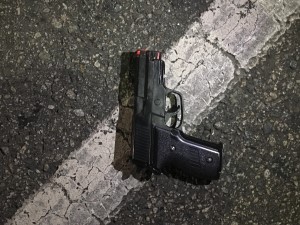 On March 7, 2018, at approx. 3:55 pm, Officers were dispatched to the area of Long Beach Boulevard and 4th Street regarding a hysterical female who stated that her husband was armed with a gun and was threatening to blow up the Federal Building. She identified his vehicle as a white Chevrolet van.

Officers then responded to her location, as well as to Ocean Boulevard in the area of the Federal Building. Officers found a vehicle matching the suspect vehicle’s description in the 300 block of Ocean Boulevard, parked on the northside of the street one half block east of the Federal Building. Upon the officers’ arrival, the van started to pull away from the curb, but then stopped when officers activated their emergency lights to conduct a traffic stop.

Officers contacted the driver of the vehicle and saw that he was armed with a handgun when he stepped out of his vehicle. He stood outside the vehicle, but remained near the van’s open door. Officers started talking to the subject and directed him to put down the handgun, but he refused to comply with their orders and told them he had explosives in the van.

Officers immediately began blocking off streets to stop vehicle and pedestrian traffic from entering the area. The incident was then handled as a barricaded suspect situation, and SWAT and SWAT Negotiators were called to the scene. Due to the proximity of the suspect’s vehicle to the Civic Center, City Hall employees were evacuated from the building, and nearby construction workers and civilians were advised to leave the area.

Officers continued to talk to the suspect to get him to put his gun down and surrender peacefully. Once SWAT Negotiators were on scene, they took over the communications with the suspect and repeatedly tried to get him to drop his gun and surrender peacefully. Negotiations with the suspect continued for nearly 2 hours, but he still refused to drop his gun so he could be taken into custody without incident.

Based on the suspect’s statement that he had explosives in the van, his continued refusal to drop his gun, and the easy access to the inside of the van, a tactical plan was put into place.

At approximately 6:00 pm, SWAT’s tactical plan was initiated based on the suspects demeanor and movements. SWAT, and assisting patrol officers, deployed multiple less lethal projectiles (40mm rubber baton rounds), and gas (CS Chemical Agent) in an attempt to subdue the suspect. The suspect then pointed the handgun at SWAT officers and an officer involved shooting occurred. A police service K-9 was also deployed during the incident.

The suspect was immediately attended to by Police and Fire Emergency Medical personnel, and lifesaving measures were given. The suspect was subsequently transported to a local hospital by Long Beach Fire Paramedics, who were already staged on scene. The suspect was then later pronounced deceased.

No officers or citizens were injured in the incident.

The suspect has been identified as 53-year old Donald McFarlane of Oregon. A motive for his actions is still under investigation.

The Los Angeles County Bomb Squad was requested during the incident and checked the vehicle. No explosives were found inside the van.

Follow-up investigations found that the suspect was linked to two additional locations and vehicles. One in the the 600 block of Elm in Long Beach and the other in the 18000 block of Tulsa Street in Granada Hills.

The Elm location involved an additional van and a garage unit the suspect was renting. Both were searched by the bomb squad and no explosives were found. The Tulsa Street location in Granada Hills involved a “Box Truck” owned by the suspect and this location was secured by LAPD officers. The LA County Sheriff’s Bomb Squad then conducted an additional search at this location and no explosives were found.

During the collection of evidence the suspect’s handgun was found to be an air-soft pistol. (Photo Above)

The Los Angeles County District Attorney’s Office will conduct an independent investigation of the incident, as they do with all officer involved shootings that result in injury or death.

Anyone with information regarding this incident is urged to call Homicide Detectives at (562) 570-7244. Anonymous tips may be submitted through "LA Crime Stoppers" by calling 1-800-222-TIPS (8477), downloading the "P3 Tips" app to your smart phone (available at the Apple App store and Google Play), or visiting www.lacrimestoppers.org.