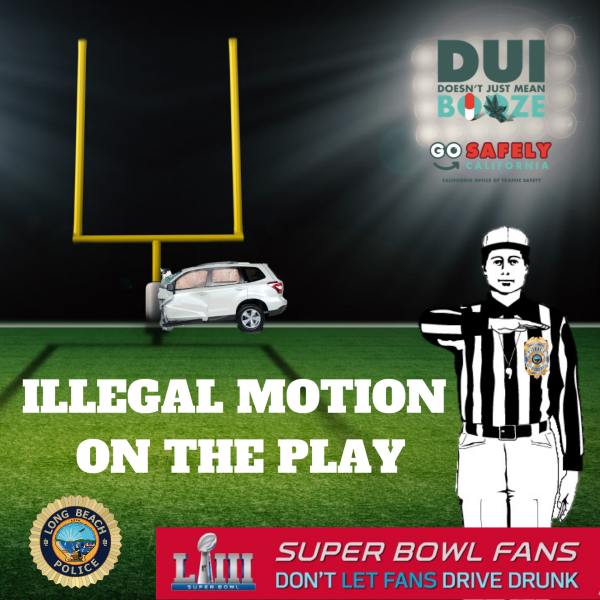 The Long Beach Police Department is encouraging all football fans to celebrate Super Bowl LIII responsibly by not driving impaired, or letting other fans get behind the wheel when they shouldn’t.

“Millions of people will be watching the Super Bowl at parties and bars across the country. Don’t put others at risk because you chose to break the law and drive impaired,” stated Lieutenant Kris Klein. “Have a game plan for the big game by making sure you have a safe way to get home.  Your best defense against impaired driving is to use a designated sober driver.”

In an effort to flag those who choose to drive impaired, Long Beach Police Department will increase patrols Super Bowl Sunday (Feb. 3) Additional officers will be on the lookout for drivers suspected of driving under the influence of alcohol and/or drugs.  Residents are also encouraged to report drunk drivers by calling 911.

The Long Beach Police Department also reminds drivers that “DUI Doesn’t Just Mean Booze.” Prescription drugs, particularly those with a driving or operating machinery warning on the label, and marijuana can also be impairing and result in a DUI, especially when used in combination with alcohol or other drugs.  If you’re hosting a party, be a team player and have plenty of snacks and non-alcoholic drinks available for designated sober drivers. Be sure to monitor who is drinking and how they are getting home. If you plan to drink, don’t plan to drive, even one drink can be one too many. So be this year’s “MVP” by being the sober driver to help others get home or if you choose to drink, use ride-shares or take public transportation.

No matter who you are rooting for on Super Bowl Sunday, we are all on the same team when the game ends so remember to go safely.

Funding for Super Bowl Sunday enforcement is provided by a grant from the California Office of Traffic Safety, through the National Highway Traffic Safety Administration.