On February 20, 2020, the Long Beach Police Department (LBPD) was notified by the Riverside Police Department that Frederick Terrence Harvey, a person of interest in a series of peeking while loitering incidents from 2019, was taken into custody in the City of Riverside.

Separate from the 2019 incidents, Harvey was identified as the suspect involved in two incidents of peeking while loitering that occurred on October 10, 2018 and November 24, 2018 in the area of Los Coyotes Diagonal and Clark Avenue. In May 2019, detectives presented their case to the Long Beach City Prosecutor’s Office and an arrest warrant was subsequently issued.

Harvey is currently being held in the custody of the Riverside Police Department.

Detectives believe there may be additional victims from the 2019 series of peeking while loitering incidents. We urge anyone who may have witnessed or who may have information regarding these incidents to immediate come forward by calling LBPD Sex Crimes Detail at (562) 570-7368. Anonymous tips may be submitted through “LA Crime Stoppers” by calling 1-800-222-TIPS (8477), downloading the “P3 Tips” app to your smart phone (available at the Apple App store and Google Play), or visiting www.lacrimestoppers.org. 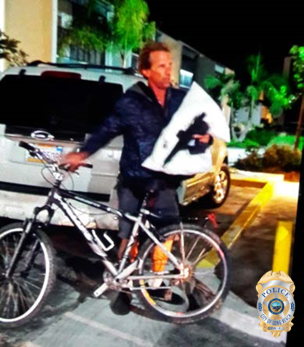 Based on the series of crime reports previously released, detectives worked with crime analysts to identify calls for service in the area with similar incident descriptions. Through this, detectives were able to collect reports on the following nine additional incidents that occurred from January 12, 2019 to October 23, 2019, at various times in the area of Bellflower Blvd. to Park Ave. and Stearns St. to Pacific Coast Highway:

Person of Interest #2 – Fredrick Terrence Harvey:
Detectives have identified Fredrick Terrence Harvey, a 51-year-old resident of Long Beach, as a person of interest who may have been involved in more than one of these incidents and would like the public’s help to locate him. Harvey is currently wanted on a parole violation and outstanding warrant.

The Long Beach Police Department (L.B.P.D.) is seeking the public’s help in identifying a suspect(s) believed to be involved in multiple incidents of peeking while loitering, more commonly known as a “peeping Tom.”

Between January 21, 2019 and October 28, 2019, at various times between 9:50 p.m. and 6:30 a.m., the Department received reports of an unknown male adult suspect looking into the windows of residences of female adult victims between the ages of 20 and 43-years-old.

The following incidents occurred in the area of Bellflower Blvd. to Park Ave. and Stearns St. to Pacific Coast Highway on the following dates and approximate times:

Another incident occurred on January 21, 2019 at approximately 9:50 p.m. in the area of Lakewood Blvd. and E. Carson St.

In most of the reported incidents, the suspect(s) approaches an exposed window of a residence, looks inside, makes a verbal remark(s) about the female victim’s physical appearance, then flees on foot. Due to the similarities in these incidents, we believe the same suspect or suspects may be involved.

The suspect believed to be involved has only been described as a male adult.

Due to multiple recently-reported incidents, the Department is seeking the public’s help to gather additional information and identify the suspect(s). Additional patrols have been added to the impacted areas and we are actively working with community partners to ensure the safety and wellbeing of nearby residents and community members.

We remind everyone that if you “See Something, Say Something” and to report suspicious activity by calling (562) 435-6711 or 9-1-1 in case of an emergency, and that posting to social media should not be a substitute to reporting a crime.

Detectives believe there may be additional victims and are encouraging anyone who may have witnessed or who may have information regarding these incidents to immediately come forward by calling the L.B.P.D. Sex Crimes Detail at (562) 570-7368 or Police Dispatch at (562) 435-6711. Anonymous tips may be submitted through “LA Crime Stoppers” by calling 1-800-222-TIPS (8477), downloading the “P3 Tips” app to your smart phone (available at the Apple App store and Google Play), or visiting www.lacrimestoppers.org.