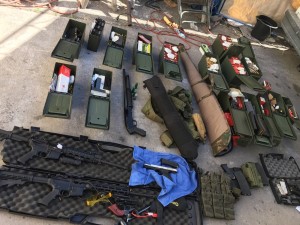 On Monday, August 19, 2019 a concerned hotel employee notified the Long Beach Police Department (LBPD) of a verbal threat of violence by an employee at local hotel in the 4700 block of Airport Plaza Drive.

The LBPD took immediate steps to investigate the alleged threat. On August 20th, detectives identified 37-year-old Rodolfo Montoya of Huntington Beach as the employee. A subsequent search of the suspect’s residence in Huntington Beach where multiple firearms, hundreds of rounds of ammunition and tactical gear were seized, including high-capacity magazines and an assault rifle, which are illegal to possess in California.

Montoya was booked on manufacturing and distributing assault weapons, possession of an assault weapon and making a criminal threat and is being held on $500,000 bail at the Long Beach City Jail.

The preliminary investigation revealed that Montoya was upset over human resource issues.

“In recent months, we have seen several tragic incidents that have resulted in many lives lost,” said Chief of Police Robert G. Luna. “The witnesses who came forward and the diligence of our employees involved in this investigation very likely prevented a threat of violence and saved many lives.”

We want to thank the hotel employee for bringing this information forward. This incident is excellent example of the “See Something, Say Something” philosophy and how critical it is to report suspicious activity to law enforcement.