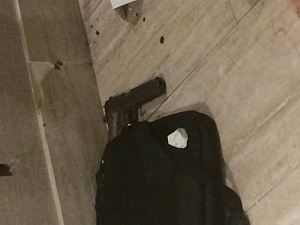 On Friday, January 5, 2018, at approx. 12:50 a.m., officers were dispatched to a hotel at Lakewood Boulevard and Willow Street regarding a person with a gun call, which resulted in an officer involved shooting.

The Long Beach Emergency Communications Center received a call from a male subject who indicated he was an employee of the hotel and was being held hostage by an armed suspect.

When officers arrived, they could clearly see into the lobby and saw a male suspect armed with a gun. Based on their observations and the information the victim was relaying to the 9-1-1 operator, the officers believed the suspect was holding employees against their will and were dealing with a hostage situation. Concerned for the safety of the employees inside and other guests staying in the hotel, officers quickly formulated a plan and entered the lobby. They made verbal contact with the suspect and gave him several commands to drop his weapon. The suspect did not comply and an officer involved shooting occurred. Two officers discharged their weapons striking the suspect, preventing the suspect from shooting the employees or officers. A gun was recovered at the scene (pictured above).

The suspect, identified as 35-year-old Andy Vo of Irvine, was transported to a local hospital and was later pronounced deceased.

Based on preliminary findings of the investigation, it appears the hotel was chosen at random. It is believed that he was not a guest of the hotel and does not have any relations to any guests or employees. The suspect’s motive for the crime remains under investigation.

Anyone with information regarding this incident is asked to contact the L.B.P.D.'s Homicide Detail at (562) 570-7255.  Anonymous tips may be submitted through "LA Crime Stoppers" by calling 800-222-TIPS (8477), downloading the "P3 Tips" app to your smart phone (available at the Apple app store or Google Play), or by visiting http://www.lacrimestoppers.org/