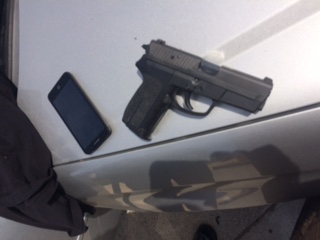 UPDATE (10/10/2016):  Suspect Bryan Gallegos, 25 years old and a resident of Carson, was booked for murder, assault with a deadly weapon upon a peace officer, felon in possession of a firearm, and carrying a concealed weapon in a vehicle. Gallegos remains hospitalized.

On October 7, 2016, at approximately 11:20 a.m., Long Beach Police Detectives were in the 1700 block of Marine Ave in Wilmington conducting follow up investigation to a Murder. The purpose of the investigation was to arrest an armed and dangerous murder suspect.

Detectives located the suspect in a vehicle and when they moved in to affect an arrest he attempted flee in the vehicle, resulting in a collision with a detective’s vehicle. Immediately thereafter an officer involved shooting occurred. Two Long Beach Detectives fired at the male adult suspect and he was hit by their gunfire.

Detectives then immediately recovered a loaded firearm and an additional loaded magazine from the suspect and started rendering medical aid until LA City Fire Department personnel arrived. The suspect was subsequently transported to a local hospital and is listed in critical condition. No detectives were injured.

Homicide detectives responded and conducted their investigation. The LA County District Attorney's office also responded and will conduct an independent investigation as they do in all officer involved shootings that result in injury. The name of the suspect is not being released at this time for investigative purposes.

The murder the suspect was being arrested for was from September 5, 2016 in the 300 block of Hanjin Road in Long Beach. To view that news release click on below link:

Anyone with information regarding the officer involved shooting or the murder from September 5, 2016 is urged to contact Homicide Detectives at (562) 570-7244.  Anonymous tips may be submitted by downloading the "P3 Tips" app to your smart phone (available at the Apple App store and Google Play), or visiting https://www.p3tips.com/TipForm.aspx?ID=365#googtrans(en|en).