UPDATE (2/17/2016):
On February 17, 2016, Suspect Cory Jamal Boyce, 28 years old and a resident of Bellflower, was arraigned. The Los Angeles County District Attorney’s Office filed charges of exhibiting a deadly weapon to a police officer to resist arrest, resisting an executive officer, burglary, and possession of a firearm by a convicted felon. He is being held at Los Angeles County Jail without bail. 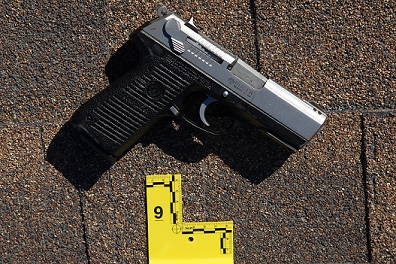 On February 10, 2016, at approximately 3:57 p.m., a Long Beach Police Officer was involved in a no-hit officer involved shooting. The incident occurred in the West Division after officers observed a vehicle make a traffic violation in the 2100 block of Martin Luther King BL.

Officers were going to conduct a traffic stop on the vehicle, but before they had a chance, the driver of the vehicle quickly stopped. The suspect/passenger immediately exited the vehicle with a handgun in his hand and began to run. The suspect then stops running, turns towards officers with the gun in his hand and the officer involved shooting occurred. The suspect then ran from officers still armed with the handgun and proceeded to hop over multiple fences in his attempt to flee arrest. The officer’s observations of the suspect being armed with a handgun were confirmed by an independent witness. The driver of the vehicle the suspect ran from also fled the scene. Assisting units quickly established a perimeter where the suspect was last seen, and the department’s SWAT Team was activated to conduct the search.

Just before 5:00 p.m. officers assisting on the call observed an altercation on the porch of a residence in the 1000 block of E. 21st Street. They quickly realized that the resident was in a physical struggle with the possible suspect. Officer’s subsequently arrested the suspect and he was positively identified shortly thereafter. The suspect had entered the residence through a side door and was immediately confronted by the occupants who were in fear for their safety. A physical struggle occurred to get the suspect out of their house which is what officers observed and then took the suspect into custody.

The suspect’s gun was later found by detectives within the area where he was last seen running. Officers were also able to locate the vehicle and the driver that were involved. They were found in the 400 block of N. Willow in the City of Compton and the car was impounded. The driver of the vehicle was interviewed by detectives and released.

In a response to some increased shooting incidents the department has been strategically deploying resources to combat violent crime in some West Division neighborhoods. As a result of these focused efforts and the efforts of area beat officers, forty eight guns have been taken off the “Street” year to date. This is a 6.7% increase compared to the same time period in 2015. These recovered guns do not include those that were taken for safekeeping. They were all used in some type of criminal activity. Of the forty eight guns recovered, 35.4% were taken off the streets from West Division, and 23% of those were found during evening hours.

The Long Beach Homicide Detail investigates all officer involved shootings. This investigation remains ongoing. Anyone with information regarding this incident is encouraged to call Homicide Detectives at (562) 570-7244. Anonymous tips may be submitted by calling 1-800-222-TIPS (8477), texting TIPLA plus your tip to CRIMES (274637), or visiting http://www.lacrimestoppers.org./