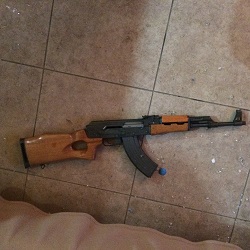 On February 17, 2017, at approximately 4:45 am, Long Beach Police Department SWAT officers were shot at by a suspect as they were serving a high risk search warrant in the 18000 block of Alexander Avenue in the city of Cerritos. No officers were injured.

• SWAT was serving a search warrant for narcotics related activity.

• SWAT was used in this incident because the narcotics investigation led detectives to believe the suspect was              possibly armed and dangerous.

• SWAT personnel surrounded the location and were going to call the suspect out when the suspect opened fire on     hem with an Assault Rifle.

• He fired on officers with the Assault Rifle from two separate locations in the residence, nearly striking them.

• After the tear gas was deployed two subjects exited the residence and were detained by officers, but the suspect     remained inside. The subjects were later identified as the mother and uncle of the suspect.

• Six homes and approximately 20 people were evacuated from the immediate area for the remainder of the tactical     operation, and taken to a safe location.

• SWAT negotiators tried numerous times to communicate with the suspect in an attempt to negotiate his surrender,     but were unable to make contact.

• After a long standoff, SWAT officers entered the residence and found the suspect deceased from a gunshot wound     to the upper torso. It is unknown at this time if the gunshot wound was self-inflicted or from the SWAT officer’s     earlier return of gunfire.


The Los Angeles County Coroner’s Office will conduct its own independent investigation, and release the identity of the suspect pending notification of next of kin.

The Police Department thoroughly reviews all use of force incidents through a rigorous multi-step process that evaluates legal, policy, tactical, and equipment issues. Additionally, the Los Angeles County District Attorney’s Office is conducting an independent investigation of the shooting, as they do with all officer involved shootings that occur in Los Angeles County that result in injury or death.

The Long Beach Homicide Detail investigates all officer involved shootings. This investigation remains ongoing. Anyone with information regarding this incident is encouraged to call Long Beach homicide Detectives at (562) 570-7244. Anonymous tips may be submitted through "LA Crime Stoppers" by calling 1-800-222-TIPS (8477), downloading the "P3 Tips" app to your smart phone (available at the Apple App store and Google Play), or visiting http://www.lacrimestoppers.org/