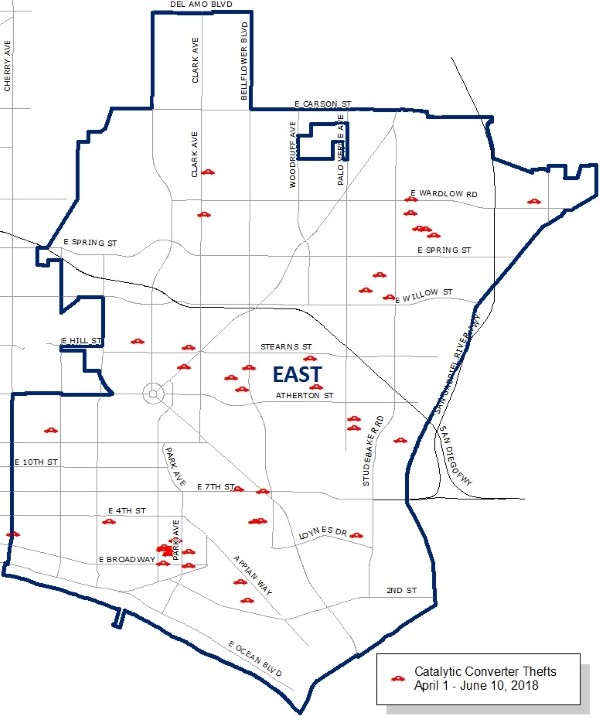 While this crime continues to be a problem for many cities across the region, the East Division has seen a recent increase in the theft of catalytic converters, and the Long Beach Police Department is asking for residents to be extra watchful for suspects involved in suspicious activity.

Suspects are stealing catalytic converters from vehicles to sell to recycling centers and unscrupulous muffler shops to earn cash. Thefts primarily occur at nighttime, but have also taken place during the day, as a converter can be removed very quickly.

The community is asked to be alert to individuals observed crawling underneath a vehicle, who sometimes have a getaway vehicle nearby. Any suspicious activity should be called in to police right away, and providing a vehicle description and/or license plate number can also be helpful if it can be safely obtained. “These thefts can occur to any type of vehicle, at any time, and at any location,” stated Patrol Bureau Deputy Chief Wally Hebeish. “We urge the community to report unusual or suspicious activity immediately.”

Victims of theft are encouraged to file a report, which can be completed online or by calling the Business Desk at (562) 570-7260. Residents are also encouraged to practice the following tips, which may prevent them from becoming a victim:

• Invest in an anti-theft cable locking device, which are significantly less costly than replacing a catalytic converter
• Park your vehicle in your driveway or garage whenever possible
• Make arrangements for your vehicle if it will be left for an extended period of time
• Install motion sensor lighting around your home
• Get to know your neighbors so it’s easier to recognize persons that don’t belong in your neighborhood; neighbors that communicate are more likely to look out for one another
• Report loiterers; they may be casing the area
• Immediately report any suspicious activity by calling 9-1-1
• If you are a victim, speak with your mechanic about potentially spot welding or collapsing the bolt threads at the time of replacement; this could prevent a second theft.