On February 6, 2020, at approximately 9:15 a.m., the Vice Investigations Detail, with the assistance of the Warrant Team, West Division Directed Enforcement Team, South Division Directed Enforcement team and West Division officers, conducted a search warrant at a building located in the 2300 block of Pacific Avenue which resulted in the arrest of six suspects.

A search warrant had previously been conducted at this location on October 16, 2019, however, detectives began receiving additional complaints of suspicious activity from concerned community members earlier this year. Through their investigation, detectives were able to determine that the building was being used to house illegal gambling activity. A total of three illegal gambling machines, one firearm and over $4,000 cash were located and seized during the search warrant.

Below is a list of suspects who were taken into custody as well as their booking charges and bail amounts:

The Department will continue to take a proactive approach to target illegal gambling activity taking place in the City, which can often lead to other violent crimes. Detectives have been working with property owners of addresses where this type of activity is occurring and our other City partners, such as the Financial Management Department’s Business Licenses Division, to address these issues and hold all those involved liable to ensure this type of activity is prevented. 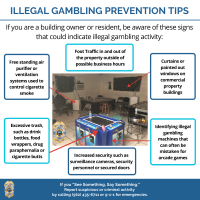 If you are the building owner, or a resident we ask that you look for the below signs, often telling that an illegal activity is occurring at that location:

We urge residents and business owners to continue to report any suspicious activity, and with the partnership from our community, we will continue to take appropriate enforcement action when necessary.

Anyone with information regarding illegal gambling activity is asked to contact LBPD Vice Investigations Detectives at (562) 570-7219. Anyone wishing to remain anonymous may call 1-800-222-TIPS (8477), or text TIPLA plus your tip to 274637 (CRIMES), or visit www.lacrimestoppers.org.