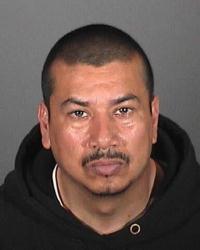 Detectives have identified 42-year-old Jose Jesus Zermeno as a suspect wanted in connection with the theft of exotic birds from a Long Beach home, and are seeking the public's help with locating him and identifying two additional suspects.

On Monday, May 4, 2015, Zermeno entered a private residential backyard in the 6700 block of Harbor Avenue and stole five exotic birds from separate birdcages. Video surveillance captured the incident where Zermeno is seen climbing over the fence into the backyard, opening birdcages, removing the birds, and handing them over the fence to a second suspect. A third unidentified suspect drove a red Ford Ranger truck, the means of transportation the suspects used to commit the crime.

Yesterday morning, May 14, 2015, at approximately 5:00 a.m., a Long Beach patrol officer spotted the truck in the area of Wardlow Road and Atlantic Avenue. The officer had knowledge the truck was wanted in connection with the burglary and attempted to conduct a traffic stop on the vehicle to further investigate. The driver of the truck failed to yield and lead the officer on a short vehicle pursuit. The officer lost sight of the truck, and it was later found abandoned in the 2200 block of Cedar Avenue. The truck was impounded and is currently in the custody of the Long Beach Police Department.

If anyone has information about this incident, or knows Zermeno’s whereabouts, they are urged to call the Long Beach Police Burglary Detail at (562) 570-7351. For an immediate police response, please call Police Communications at (562) 435-6711. Anyone wishing to remain anonymous may call 1-800-222-TIPS (8477), or text TIPLA plus your tip to 274637 (CRIMES), or visit www.LACrimeStoppers.org.