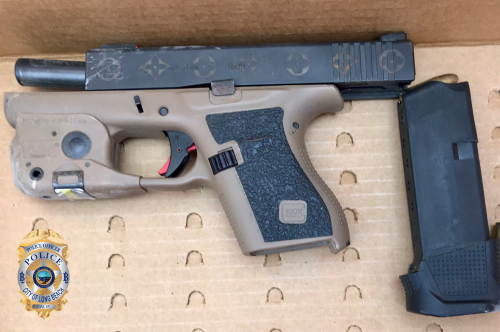 Suspect taken into custody by S.W.A.T. officers after he fired at police officers early this morning.

At approximately 2:00 a.m., officers were dispatched to the 1200 block of East 4th Street regarding a potential hit shooting that just occurred. While en route, officers were advised a group of bystanders were attempting to detain the shooting suspect.

After locating the suspect in the apartment complex, our S.W.A.T. team responded and attempted to de-escalate the situation. For approximately four hours, officers attempted to negotiate with the suspect and gave him multiple opportunities to safely surrender. The suspect still refused to comply, and moderate force was used to safely take the suspect into custody.

The suspect sustained a non-life-threatening injury to the upper body as a result of a K-9 contact. The suspect was transported to a local hospital by the Long Beach Fire Department.

The preliminary investigation revealed, the suspect fired at least one shot towards the officers before his firearm malfunctioned. Detectives are currently interviewing witnesses to determine if the suspect fired his weapon prior to officers’ arrival. Currently no injuries have been reported and no officers were injured during the incident.

“I want to commend our officers for the courage they show every day while running towards danger to protect our community. This suspect showed a complete disregard for the lives of others and must be held accountable. Our officers’ actions of safely de-escalating a volatile and violent situation demonstrate the extensive training they receive and show how difficult it is to be a police officer today,” said Long Beach Police Chief Robert G. Luna. “Gun violence in our city is very concerning for all of us and your Police Department will continue to find solutions to peacefully address crime in our city.”

The suspect has been identified as 28-year-old Arturo Reyes Ortiz, a resident of the City of Long Beach. A loaded firearm was located at the scene and will be processed by our Forensic Science Services Division. The suspect will be booked for attempted murder once he is medically cleared. At this time, detectives do not currently know the motive, but believe the suspect was under the influence of alcohol and/or drugs and believe this was not a random act of violence.

Anyone with information regarding this incident is urged to contact Long Beach Police Homicide Detectives Adrian Garcia and Sean Magee at (562) 570-7244. Anyone wishing to remain anonymous may call 1-800-222-TIPS '(8477), or test TIPLA plus your tip to 274637 (CRIMES), or visit www.lacrimestoppers.org.