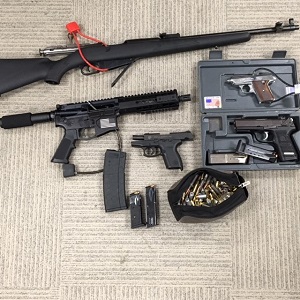 On January 11, 2018, at approximately 4:50 PM, the Long Beach Police Department SWAT Team served a search warrant at a residence in the 900 block of N. Marine in the City of Wilmington, looking for a suspect wanted in an attempt murder investigation from December 26, 2017.

Upon serving the search warrant SWAT officers located the suspect inside and took him into custody without incident. The suspect is identified as 32 year-old Ezequiel Cuebas a resident of Wilmington. He was booked into the Long Beach Jail for attempt murder and unlawful possession of an assault rifle, and is being held on $1,00,000.00 bail.

During the search of the residence detectives recovered numerous firearms including an assault rifle (pictured above). It is not known at this time if any of the weapons seized during the search warrant were used in the original shooting.

Officers were dispatched to assist the Long Beach Fire Department with a shooting victim around Pacific Coast Highway and Chestnut Avenue. The victim was shot in the upper torso, and was subsequently transported to a local hospital by paramedics.

Upon arrival officers conducted their investigation and found evidence that lead them to the 1700 block of Cedar, where they found the original crime scene. The shooting was believed to be gang related so gang detectives were called to the scene to handle the investigation. Detectives conducted a thorough investigation, and thanks to their relentless follow up they were able to identify a possible suspect and a location where he was staying, which led to the service of the search warrant and his arrest.

Anyone with addition information on this incident is urged to call Gang Detective Chris Valdez at (562) 570-7276. Anonymous tips may be submitted through "LA Crime Stoppers" by calling 1-800-222-TIPS (8477), downloading the "P3 Tips" app to your smart phone (available at the Apple App store and Google Play), or visiting www.lacrimestoppers.org.