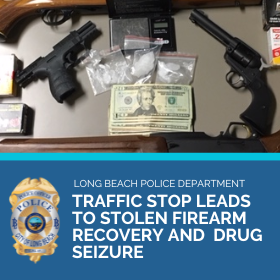 
On July 14, 2022 at approximately 5:05 p.m., officers assigned to the Coordinated Response Team (CRT) were driving eastbound on Broadway near Linden Avenue, when they observed a vehicle execute a traffic violation. This resulted in the officers conducting a traffic stop of the vehicle, where they contacted a male adult suspect. While officers detained the suspect, they discovered four firearms, one of which was stolen, and narcotics. Officers subsequently arrested the suspect and transported him to Long Beach City jail for booking.

Excellent work by our CRT officers!