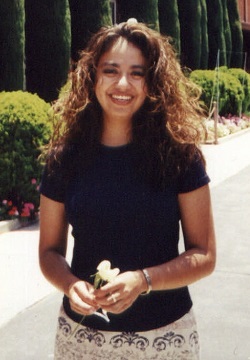 
On November 17, 2016, an excavation was conducted in connection with a missing person case that was initiated over 16 years ago. Detectives believe that 27-year-old Diana Rojas was murdered and examined an area in Ridgecrest, California, in an attempt to locate her remains. Four areas of interest near West Boston Avenue and South Guam Street were explored and ruled out. No human remains were found.

In 2000, Diana Rojas and her 2-year-old daughter lived in an apartment in the 5500 block of Ackerfield Avenue. Diana was last seen at her home on Friday, October 20, 2000. She missed a scheduled appointment the next day. On Sunday, when her family was still unable to locate Diana or her black 1992 Nissan pick-up truck, they called police. At the time of Diana’s disappearance, her daughter was in the care of a family member at another residence. By all accounts, it was uncharacteristic for Diana to leave her child without warning. Due to suspicious circumstances at the residence, Homicide detectives responded to the scene to investigate. They collected evidence from the apartment and interviewed relatives and friends. Unfortunately, none of the information led to Diana’s whereabouts and the case went cold.

At the time of her disappearance, Diana worked at a church and helped young single mothers. She was described as follows:

Detectives received an anonymous tip that the Diana was deceased and a location where she could possibly be located. Technology and tools available today allowed detectives to move this case forward. Further investigation led to Ridgecrest, California, where detectives believed Diana’s remains may be buried. Utilizing satellite images of Ridgecrest, NecroSearch* pinpointed areas where there were inconsistencies to the topography.

The investigation remains ongoing. Anyone with information regarding Diana Rojas or her vehicle is urged to call Long Beach Police Homicide Detectives Mark Bigel and Todd Johnson at (562) 570-7244. Anonymous tips may be submitted through "LA Crime Stoppers" by calling 1-800-222-TIPS (8477), downloading the "P3 Tips" app to your smart phone (available at the Apple App store and Google Play), or visiting www.LACrimeStoppers.org.

* NecroSearch is a multidisciplinary team of scientists and investigators who assist law enforcement in the location of clandestine graves and the recovery of evidence. Since 1988, NecroSearch has assisted in over 300 cases in over 43 states and 10 countries. The NecroSearch mission also includes training and research. NecroSearch is a 501(c)3 non-profit corporation and all members are volunteers. The two NecroSearch scientists who will be assisting in this search include a forensic geologist and forensic geophysicist with over 70 years of combined experience in locating clandestine graves.