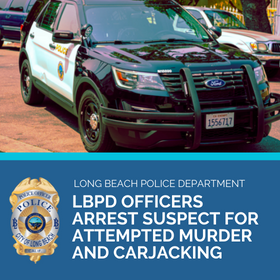 On March 3, 2022 at approximately 8:35 a.m., officers were dispatched to the 2100 block of Williams Street regarding a carjacking and possible assault with a deadly weapon. Upon arrival, officers contacted a male adult victim with life-threatening injuries to the upper body. Long Beach Fire Department personnel responded to the scene and transported the victim to a local hospital for his injuries where he remained in critical condition.

The preliminary investigation suggested that the victim was entering his vehicle when he was approached by an unknown male suspect who subsequently assaulted the victim and fled the scene in the victim’s vehicle.

Over the following weeks, Detectives conducted an extensive investigation. The victim’s vehicle was recovered and processed for evidence. Detectives gathered sufficient evidence to identify and locate the suspect. On May 26, 2022, detectives from the Special Investigations Division arrested Marcus Miller, an 18-year-old resident of Las Vegas, Nevada outside of a residence. Miller was booked on one count of attempted murder, one count of carjacking and one count of possession of methamphetamine. Bail was set at $1,000,000.

Detectives will present the case to the Los Angeles County District Attorney’s Office next week for filing consideration.

The victim of this incident is now in stable condition and recovering.