The Studio's Summer S.T.E.A.M. drone program, originally scheduled for 9/18, has been moved to 10/2 at 2PM. We look forward to seeing you there!

Our telephone notification system is not working at this time. We apologize for any inconvenience. While we work to get it fixed, you can check your holds and renew your materials through our website by going to My Account under Borrow or call one of our library locations.

The bookdrop at Burnett Library is currently out of order—swing by Dana, Harte, Twain, or any of our other locations to return library materials after hours. 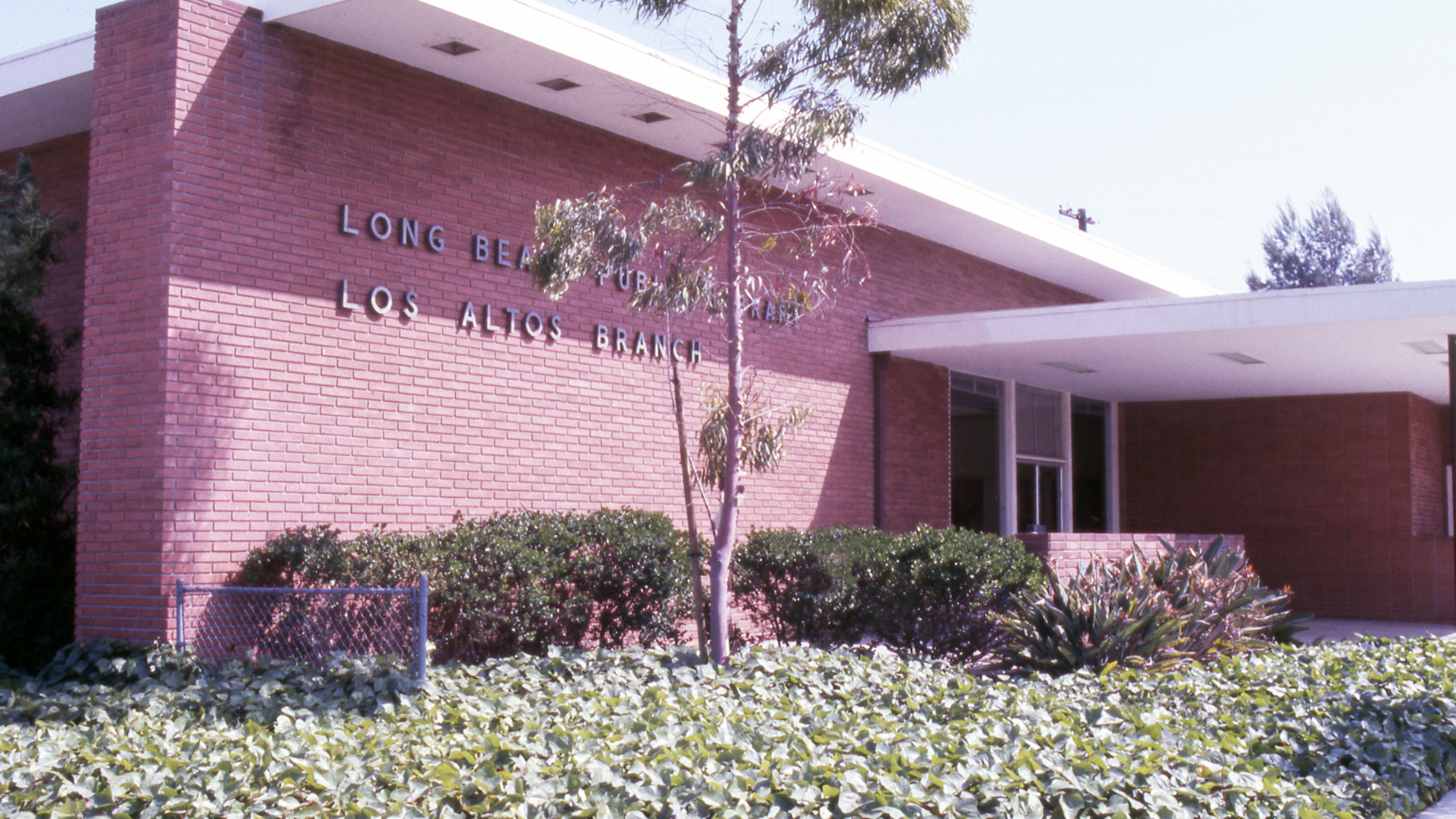 As Long Beach suburban development switched into post-WWII overdrive, the Long Beach Public Library worked to keep pace with the ever-expanding needs of an ever-expanding populace. Though the library was guided by the publicly stated principle that there should be a library branch accessible within a mile of all Long Beach residents, the city’s population was extending into newly developing neighborhoods faster than the branches could be proposed, funded, and constructed.

One way LBPL brought service to the spread-out public was through the creation of the LBPL bookmobile, believed to be the first library bookmobile in any California city. Long Beach’s bookmobile program started in 1944 with a decommissioned 1936 station wagon that was modified, repainted, and loaded with around 500 books. The bookmobile travelled to locations across town on a weekly schedule, allowing patrons in outlying Long Beach neighborhoods to check out and return books. Story hour programs for children were also offered. 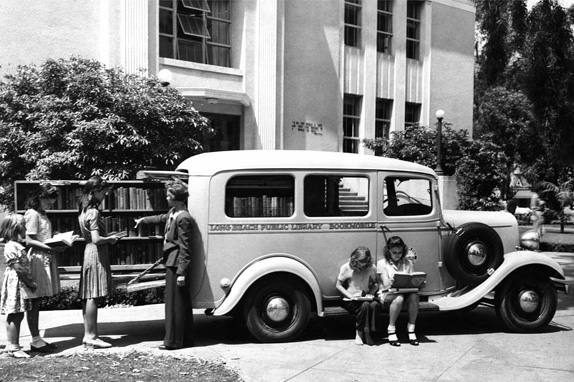 Long Beach’s first bookmobile, in front of the old Main Library in 1945.

The bookmobile program was a massive success. Patrons—kids, especially—in any particular neighborhood would line up in anticipation for the weekly visit from the bookmobile. To improve service, a retired Glendale city bus was purchased and converted into a bookmobile in 1949, but that soon proved not large enough, either. 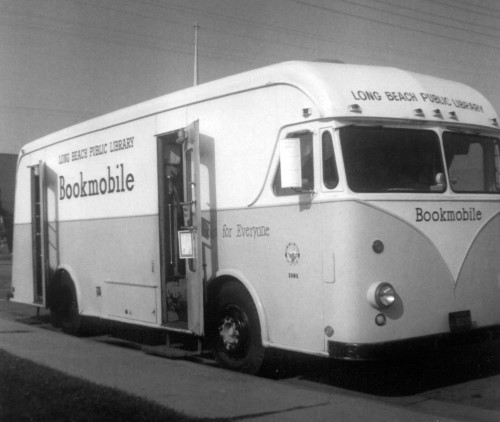 In 1954, a new 30-foot bus with shelf space for some 4,000 books was purchased from the Gerstenslager Company of Wooster, Ohio, a company known for manufacturing custom vehicles, such as the 1952 Oscar Meyer Wienermobile. By the mid-1950s, the bookmobile’s most popular stop was Saturday mornings on the east end of town, at the corner of Spring St. and Palo Verde Ave.

Thousands of new houses were being built on the east side of Long Beach, notably in the area known as Los Altos, near where Long Beach State College was being established, and the fledgling community was hungry for library service. The planned community of Los Altos had been envisioned by Long Beach developer Lloyd Whaley as a near-utopian vision of mid-century suburbia—a peaceful, affordable place for baby-booming working-class families. Key to Whaley’s plan was ensuring the neighborhood had all the things any community needed: schools, parks, a shopping center, a post office, a YMCA, and, not least, a public library. To that end, Whaley undertook the construction of the then-massive Los Altos Shopping Center, and donated land on which to build a library, a YMCA, and a park. The Los Altos Shopping Center opened in March 1956 to much fanfare and hype. 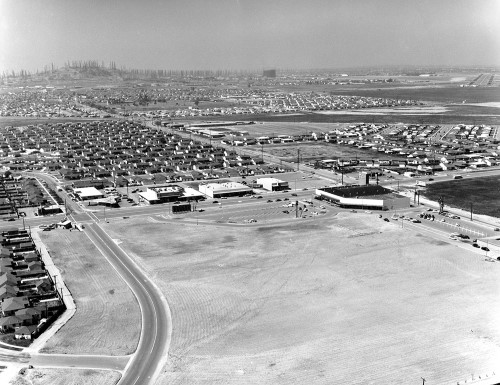 Construction of the Los Altos Shopping Center in 1953. Bellflower Blvd. runs left to right (south to north) crossing Stearns St. The donated lot for the library is near the bottom-left corner of the photo. Note the oil derricks on Signal Hill in the distance.

The new library wouldn’t be far behind, opening about a year later, on February 21, 1957.

“The Los Altos area will observe another important milestone in its development into the finest community in the world in which to reside and raise children this afternoon as the new Los Altos branch of the Long Beach public library is officially dedicated,” said one local newspaper.

The Los Altos branch was constructed at the cost of $132,000, and was the first LBPL branch built with air conditioning.

At the dedication ceremony, developer Whaley and his wife were the first patrons to receive library cards from the branch. Librarian Mildred Snider, who had been the LBPL’s bookmobile librarian, was named Los Altos branch librarian, and brought the bookmobile’s familiar friendly atmosphere to the branch. The Los Altos branch proved immediately popular, and soon its circulation rivaled and sometimes exceeded that of all LBPL libraries, including Main. The Los Altos branch remains a vital part of the community and one of the most popular branches in the city. 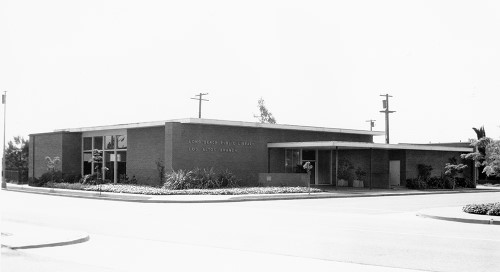 We invite you to visit our featured library this month for fun events including family storytimes, book club, movie matinee, and BARK or just to pick up your next great read. For the kids, download the Los Altos coloring page or stop by the branch and pick up our family themed craft kit to help celebrate this cozy family branch library!