Face masks covering nose and mouth are recommended for all patrons when in library buildings.
Home » Library » Dana History 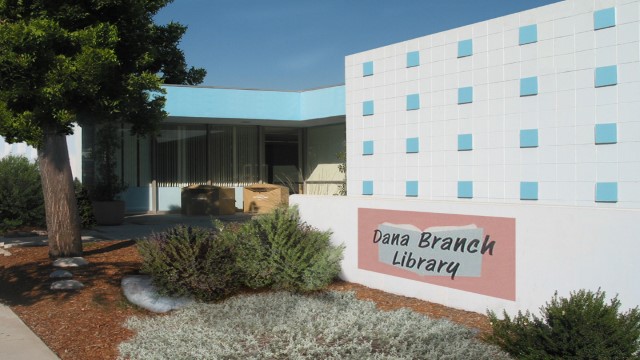 Like much of Long Beach in the 1920s, the neighborhoods of Bixby Knolls and California Heights experienced an intense period of development following the Signal Hill oil discovery of 1921. New money, people, and construction flooded the town, and hundreds of families moved to the burgeoning “uptown” Long Beach area along Atlantic Blvd., land that had until recently been part of the Bixby Ranch.

The first public library in the neighborhood was the California Heights station, a small sub-branch library at 913 Wardlow Rd., opened in 1928. Though the California Heights station was a cramped one-room affair open only one day a week, it was an immediate hit with the community. In 1941, City Librarian Theodora Brewitt announced the library’s move to roomier, “more pleasant” quarters in a new storefront rental property.  The new library also had a new name: the Richard Henry Dana Branch Library.  On December 18, 1941, the Dana library opened at 3924 Atlantic Ave. 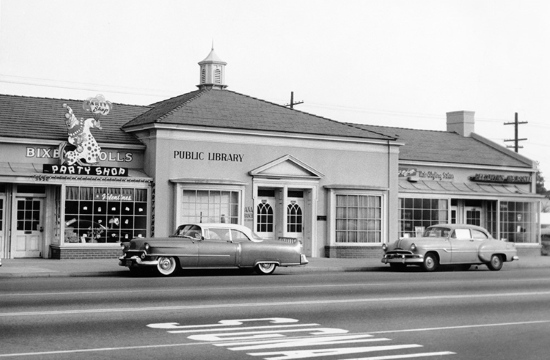 The library’s namesake was Richard Henry Dana, Jr., the nineteenth-century lawyer, activist, and author of Two Years Before the Mast, the classic memoir of Dana’s time working aboard a merchant ship called the Pilgrim, which sailed from Boston to California in the 1830s.  While onboard, Dana had witnessed the routine brutal abuse of sailors, including a notable incident while docked at San Pedro which is described in his book.  Dana devoted much of the rest of his professional life to fighting for the rights of exploited or oppressed communities.

While the storefront library was a definite step up, it was only a stop-gap measure.  The rental property wasn’t designed to meet the needs of a functioning library, and though it was larger than the previous location, it was soon deemed too small for the neighborhood it served.   LBPL urgently advocated for a new branch in Bixby Knolls/California Heights, as well as for several other new branches around town, citing convincing data about library use and public demand.  In 1956, voters approved a $659,000 bond issue to fund the much-needed replacement of four branches, including Dana, Harte, Bay Shore, and Lakewood (soon to be known as Ruth Bach).

The present-day Richard Henry Dana Branch Library at 3680 Atlantic Ave. was dedicated on May 29, 1958.  The new city-owned building, hailed as “ultra-modern” by the Press-Telegram, had more than double the shelf space of the previous location, as well as an auditorium, office, kitchen, staff room, and work room.  It was also air-conditioned and was said to be sound-proofed. 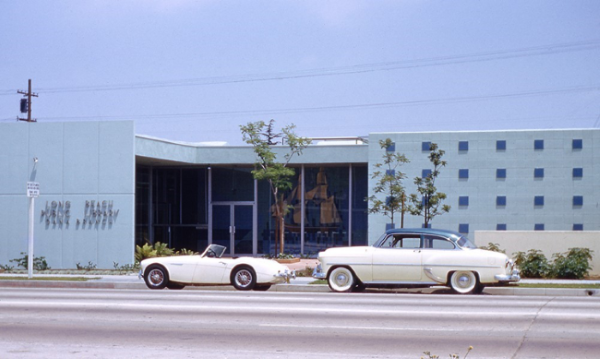 The Dana Neighborhood Library opened May 30, 1958.

A unique feature of the new library was the mosaic tilework, “Pilgrim,” in the entrance hall, named for the ship Dana had sailed aboard.  The image, modeled after ships used in Dana’s time, was drawn by Long Beach State College art professor Arthur Adair and designed on Hermosa tiles by the famous ceramics firm, Gladding, McBean, & Co.   The building’s exterior was originally painted white but caused such a glare on Atlantic Ave. that it was repainted blue in its first weeks. 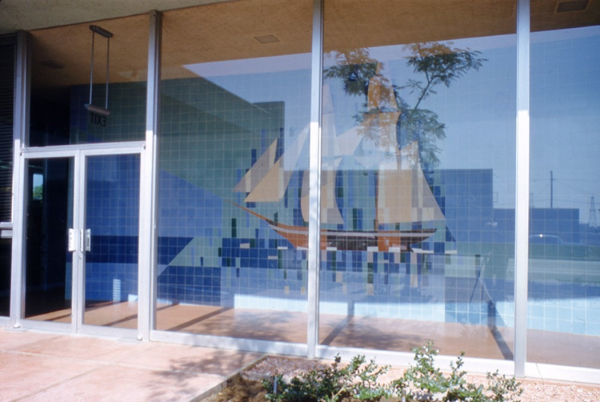 The entrance to the Dana library in the late 1950s.

By the end of 1958, library use citywide was up 12%.  Long Beach City Librarian Edwin Castagna attributed a substantial part of the gain to the opening of the three newly constructed branches:  Harte, Bach, and Dana.  “It would be interesting to know how many acts of juvenile delinquency have not occurred because the teenagers were busy learning and not on the streets,” Castagna told the Press-Telegram.

The Dana Library remains a vital part of the Bixby Knolls and California Heights communities, and one of the most popular branches in the city. Download our latest library coloring page and have fun decorating the Dana Library in new and different ways.