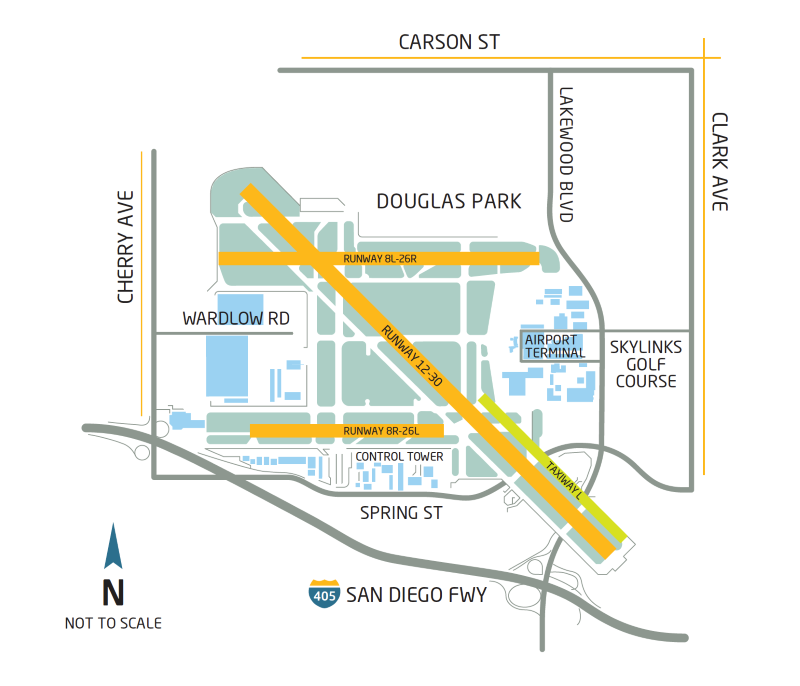 Long Beach, CA – A major construction project to improve the safety of the Long Beach Airport (LGB) airfield will commence the first week in January and is expected to last through August 2022. The $25 million project, primarily funded by grants from the Federal Aviation Administration (FAA), will bring the airport in line with the latest FAA standards.

The project will reconstruct Taxiway L, which is the primary taxiway for all departing commercial aircraft. The asphalt pavement has reached the end of its useful service and will be reconstructed with concrete pavement that has an anticipated service life of 40 years.

Because the construction will occur adjacent to the main runway, Runway 12-30 will close nightly from 10 p.m. until 6 a.m. through approximately August, with the exception of Friday and Saturday evenings. Due to the closure, operations will shift to Runway 08L-26R, which runs parallel and just north of Wardlow Road.

Long Beach Airport, which has one of the strictest noise control ordinances in the nation, requires that all commercial flights be scheduled between 7 a.m. and 10 p.m. Operations between 10 p.m. and 11 p.m. are allowed if the delays are caused by weather, air traffic or mechanical issues.

Residents with questions or desiring more information may visit www.lgb.org/noise or contact lgbnoise@longbeach.gov. A map showing the change in flight paths may be viewed here.

Sustainability efforts in the project include the replacement of all existing taxiway lights and signage with LED lights, which have a much longer life expectancy, lower energy consumption and lower maintenance costs compared to existing lighting. Additionally, the contractor will re-use asphalt millings from the demolition of the existing Taxiway L as a base material for the new pavement section, which will significantly reduce the number of dump truck trips required for construction of the aggregate subbase and the amount of new aggregate material that needs to be produced.

LGB encompasses 1,166 acres and has three runways. It is unique among municipal airports for its diverse portfolio of Class A office buildings, hotels, retail, industrial facilities and a municipal golf course.