F-18 Aircraft to Operate from LGB This Weekend 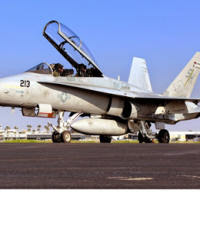 On Saturday, February 20, four F/A-18 aircraft will be arriving at Long Beach Airport (LGB). The aircraft are scheduled to arrive in the afternoon, and depart on Sunday, February 21, in the morning. All times are tentative and subject to change.

The U.S. Marine Corps has consistently demonstrated a desire to assist LGB in being a good neighbor. The F/A-18 aircraft operations will be restricted to daytime hours.

F/A-18 aircraft are noticeably louder than other aircraft and are easily heard in neighborhoods near Long Beach Airport. The aircraft will utilize noise abatement procedures when operating in the vicinity of Long Beach, including modified arrival and departure flight profiles and minimum use of afterburners.