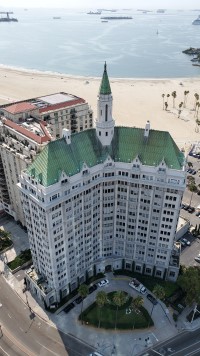 Situated in a commanding position at the terminus of Alamitos Boulevard on Ocean Boulevard, its imposing profile with its steep copper roof and crowning turret make the building a prominent landmark. At 15 stories, it was the second tallest building in Southern California (first was Los Angeles City Hall). The picturesque Chateauesque design won an international architectural competition. Built as a luxury "own-your-own" apartment, it also was a hotel in the past. Today it is a condominium. The building underwent a comprehensive rehabilitation in 1989-90, including seismic strengthening and repainting. It was listed on the National Register of Historic Places in 1996.

Keep up With LBDS