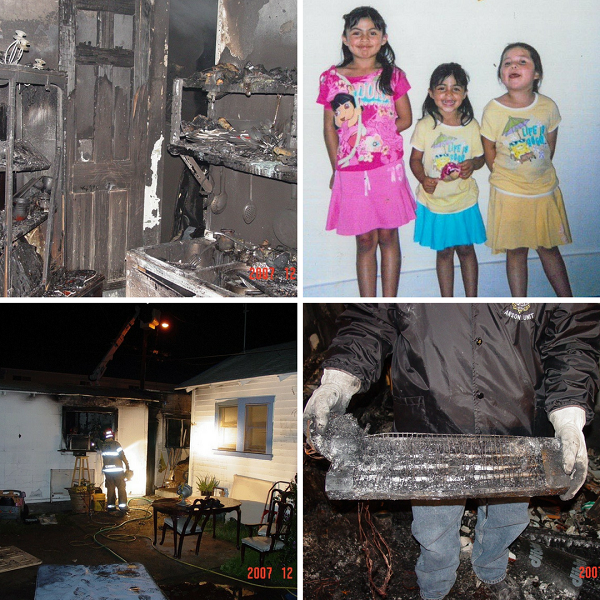 On this day, ten years ago, the Aviles sisters, Jasmine (age 9), Jocelyn (age 7), and Stephanie (age 6) died in a horrific Long Beach converted garage fire. This tragedy is a constant reminder that converted garages used as living quarters are deadly and illegal.

The children had been visiting their aunt on a chilly night shortly before Christmas in 2007. As the girls went to bed in a cramped garage made into a two-room apartment, their 17-year-old aunt brought a space heater into the garage to warm everyone up.

As the girls slept, a space heater plugged into an overloaded power strip caught fire. There were no smoke alarms or sprinklers in the converted garage.

Unable to escape the fire, all three children died of carbon monoxide poisoning and burns.

As rent and house prices continue to rise, there are property owners that try to take advantage of every piece of property they can, often without getting city permits. This can be dangerous and in the case of this preventable tragedy, deadly!

Since the fire, hundreds of unpermitted garage conversions have either been eliminated or brought up to code thanks to the beefed-up enforcement. An official with the department said inspectors find exposed wiring, crowded quarters and other safety concerns in illegal garage conversions across Long Beach, where demand for cheap housing is high. Illegal conversions are tempting for many.

Exactly three years after the fire, on December 14, 2010, the City drafted the “Aviles Law,” named in memory of the Aviles girls and to educate the public about the dangers of illegal garage conversions.

The law, which requires that property owners remove all illegal renovations and return structures to their original use, was later adopted in April 2011 by the City Council after being introduced by 6th District Councilmember Dee Andrews. The City’s law carries fines of more than $1,000 per violation.

State lawmakers have since worked with Long Beach City officials to continue the City’s efforts by drafting a statewide resolution, known as Assembly Concurrent Resolution (ACR) 32, introduced by former Assemblymember Bonnie Lowenthal (D-Long Beach). The resolution was officially passed by the State Legislature in May and filed with the Secretary of State on June 5, 2013.

While the resolution imposes no statewide fines, it recognizes that the provisions in city and county government building and safety codes regulating illegal garage conversions as “Aviles Law.” The resolution also declares May 2013 Building and Safety Month in the State of California.

This small token of remembrance is of little comfort for the family who rented the apartment where three little girls were trapped and died in an illegally converted garage. The “Aviles Law” is a display of a city’s priorities to make sure this does not happen again.

If you see or know of any illegally converted garages in Long Beach, please report them immediately by calling the Code Enforcement Reporting line at 562-570-2633. A life may depend on it!

Please Note: Content used for this post was pulled from an Opinion article written by the Long Beach Press Telegram titled ‘Aviles Law’ born out of three girls’ deaths in illegally converted garage. This article was initially published on October 24, 2013. Additional information was collected from an article published by the Signal Tribune titled "State recognizes LB’s ‘Aviles Law’ that targets illegally converted garages after fatal 2007 fire." This article was published on October 25, 2013.