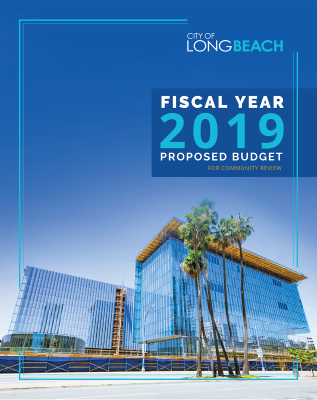 “In my four years as Mayor, this is our best budget yet. We increase support for public safety, make large investments to end street homelessness, fix more streets, and grow our reserves while maintaining our AA- credit rating,” said Mayor Robert Garcia.

“Long Beach continues to be recognized on a national level for our accomplishments including being named the most walkable city on the West Coast, one of the most bike friendly cities in the nation, having a parks system that has risen to Top 21 in the country, and being a leader in climate change,” said City Manager Patrick H. West. “Long Beach is certainly on the rise.”

The proposed FY 19 budget addresses many critical issues that are of concern to Long Beach residents. A few are listed below.

Currently, the City spends approximately $14 million on Homeless Services, Outreach and Response utilizing Federal Department of Housing and Urban Development (HUD), State, City, and County funding including Measure H. The FY 19 budget continues existing services as well as implements enhancements for homelessness such as the addition of:

Measure A plays a central role in maintaining public safety services, supporting 108 police officers and firefighters that would have otherwise not had funding. Past Measure A public safety restorations and enhancements included:

The FY 19 proposed budget allocates Measure A and other funds for new public safety services and resources, which include:

Infrastructure and Other Critical Needs

The FY 19 budget also proposes a robust $120.8 million Capital Improvement Program (CIP) bolstered by Measure A funds, which invests in mobility, public facilities, parks and recreation, beaches and waterways, utilities, and the Long Beach Airport. Additionally, other critical needs investments will include:

The FY 19 proposed budget includes but is not limited to the following innovative approaches to achieve greater operational efficiencies and service delivery:

Investments in Arts and Culture

The FY 19 proposed budget increases the City’s contribution to the Long Beach Convention and Visitor’s Bureau, the Museum of Art, and the Long Beach Arts Council. The budget also provides one-time funding for the POW! WOW! Mural Program, gateway and wayfinding signage, and one Beach Street event.

The City Council will begin the budget review process at its next meeting, which is scheduled for Tuesday, August 7. The Budget Oversight Committee will meet in August to review the budget and provide recommendations to the full City Council. City residents will also have the opportunity to provide input through the Budget Priority Survey as well as participate in budget hearing workshops.

For more information about the budget, or to access the Community Budget Book, the Budget Priority Survey, the City Manager’s Budget Presentation, Mayor Robert Garcia’s Budget Message and information about budget hearings and workshops where residents can provide input, those interested can visit the Financial Management Department website at http://www.longbeach.gov/finance/city-budget-and-finances/budget/budget-information/.