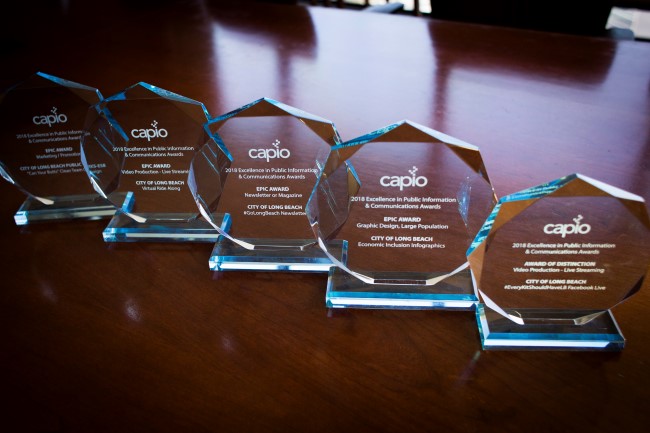 At the 2018 California Association of Public Information Officials (CAPIO) Conference in Santa Rosa, California, and for the second year in a row, the City of Long Beach was awarded five of CAPIO’s top communications awards. Four of the awards were Excellence in Public Information and Communications (EPIC) Awards, which is the top honor CAPIO bestows to any public organization.

“Our public information teams have demonstrated innovation, creativity, and passion in keeping our residents informed about city programs and services,” said Mayor Robert Garcia. “I am proud of their work and know they'll continue to implement creative strategies that help us maintain excellent community relations.”

The City’s #GoLongBeach Newsletter, which launched March 2017, won an EPIC Award in the Communications and Marketing Tools-Newsletter or Magazine category. To meet the needs of its growing online community, the City established a digital newsletter, which on a regular basis, provides subscribers with the latest news and updates about the City and its many projects and initiatives.

The City took home two awards in the Communications and Marketing Tools-Video Production (Live Streaming) category. The “Virtual Ride Along” live stream, a collaboration between the Long Beach Fire Department and the Department of Financial Management Measure A Communications team, received the EPIC Award. This live streamed event successfully created an opportunity for residents to establish a human connection to the City’s newest local revenue source, Measure A, by telling the often unspoken stories of City workers who serve the community thanks to Measure A funding. The “Virtual Ride Along” reached Long Beach residents and stakeholders through social media and showcased the restoration of Fire Engine 8.

Also in the Communications and Marketing Tools-Video Production (Live Streaming) category, the Award of Distinction went to the City’s #EveryKitShouldHaveLB Facebook live stream. Continuous changes in social media algorithms have altered the way people see content. Understanding the issues pertaining to social media outreach and engagement, the City’s Public Affairs and Communications Team collaborated with the Department of Disaster Preparedness and Emergency Communications (DPEC) to create a Facebook live stream informing social media followers of what a good emergency kit should include. This video is a part of the City’s monthly “Facebook Live” series that was launched in April 2017.

In the Graphic Design, Photography and Visualization category, the City received an EPIC award for its Economic Inclusion Infographics. In April 2017, the Long Beach City Council approved the City’s Draft Blueprint for Economic Development (Blueprint) that focuses on advancing a 10-year vision of making Long Beach a City of opportunity for workers, investors and entrepreneurs. One of the key focus areas in the Blueprint is Economic Inclusion. The Economic Inclusion Infographics were a collaboration between the Economic Development Department, the Health Department’s Office of Equity, a City Management Assistant, and the City’s Graphic Designer. The infographics played a profound role in unveiling the existing economic and racial inequities in Long Beach to the Economic Development Commission, City staff, other community stakeholders, and Long Beach residents. Conjointly, the infographics also helped shape solutions that are addressing inequities and improving the economic well-being for all in Long Beach.

The City’s “Can Your Butts” (CYB) Campaign received an EPIC Award in the Communications and Marketing Tools—Marketing/Promotional category. Last year, the Department of Public Works-Environmental Services Bureau (PW-ESB) developed the CYB program to reduce cigarette litter in major business corridors with branded public messaging and partnerships with local businesses. The CYB program gained buy-in from 73 local restaurants, bars, and barber shops who had committed to participate in the initiative.

Home to approximately 470,000 people, the multiple award-winning and innovative City of Long Beach offers all the world-class amenities of a large metropolitan city while maintaining a strong sense of individual and diverse neighborhoods nestled together along the California coast. Long Beach is home to the Queen Mary, Aquarium of the Pacific, several museums and theaters, a highly-rated school district, Long Beach Airport, the Port of Long Beach, as well as many award-winning City departments such as Health, Parks, Recreation and Marine, Development Services and more. The City also has a highly-respected university and city college, two historic ranchos, five hospitals, five golf courses, 171 parks, miles of beaches, marinas, bike paths, and a Bike Share program.