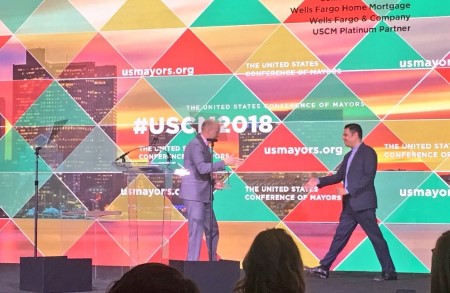 “It’s truly an honor to be a recipient of the CommunityWINS® grant,” said Mayor Robert Garcia. “I would like to thank the U.S. Conference of Mayors and the Wells Fargo Foundation for this investment in our City’s nonprofit. We look forward to utilizing the fund to create a healthy marketplace for hourly labor in Long Beach.”

The grant was awarded to Pacific Gateway Workforce Partnership for the Citywide Market for Hourly Labor program. Seventy percent of those with irregular work schedules in the area are disabled or caregivers who work uncertain hours, often for multiple employers. Using software, the City of Long Beach will build a marketplace for hourly labor around protections, progress, individual control and alignment with employers’ needs.

“Our Pacific Gateway Workforce team is excited to receive this grant and look forward to establishing a local project team to implement the Citywide Market for Hourly Labor program in the coming months,” said Executive Director Nick Schultz, Pacific Gateway Workforce Partnership. “This project builds upon philanthropic investments from both the Annie E. Casey and the Ewing Marion Kaufman Foundations, and is the only effort of its kind nationally being undertaken by the public workforce system.”

“The conference and Wells Fargo share similar values focused on helping communities across the U.S. succeed, and the 2018 CommunityWINS® Grant Program is an opportunity to honor productive neighborhood revitalization efforts that are making a difference,” said Tom Cochran, CEO and Executive Director of the U.S. Conference of Mayors. “We appreciate Wells Fargo and the Wells Fargo Foundation for their support of the CommunityWINS® Program, which also highlights the leadership of mayors and city governments.”

Launched in 2015 with a three-year, $3 million commitment, the CommunityWINS® grants program will extend into 2020 with an additional $3 million investment by the Wells Fargo Foundation, bringing the total to $6 million over six years.

“Wells Fargo is pleased to team with the U.S. Conference of Mayors to make these grants available for nonprofits and enable them to revitalize neighborhoods,” said Martin Sundquist, Executive Director of the Wells Fargo Housing Foundation. “Wells Fargo cares about the communities we serve, and the 2018 CommunityWINS® grant program is among several economic empowerment efforts we support to strengthen communities.”

Mayor Garcia was in Boston with more than 250 of the nation’s mayors to attend the United States Conference of Mayors annual summer meeting where he also served on the organization’s Nominating Committee. As a Nominating Committee member, Mayor Garcia helped select a diverse group of mayors to fill leadership roles for USCM. He and the other mayors discussed a wide variety of priorities that contribute to the overall health of America’s cities, including the need for infrastructure investments and strategies to make cities more innovative and inclusive. The meeting began Friday and ended yesterday, Monday, June 11, 2018.

Pacific Gateway Workforce Partnership is a nonprofit organization created to enhance the delivery of workforce development services in Long Beach, Signal Hill, and the Los Angeles Harbor communities. Pacific Gateway’s goal is to improve the economic vitality of an entire region by connecting job seekers to resources that will enable them to become economically stable, and create a robust business community that is connected to a well-trained and skilled labor force.

The mission of the City’s Economic Development Department is to create economic opportunities for workers, investors, and entrepreneurs. This includes making it easier to start and grow a business, streamline the process for property development, and provide businesses with a skilled workforce. The Department includes Property Development, Business Development, and the Pacific Gateway Workforce Investment Network. For more information on the Economic & Property Development Department, please visit http://www.longbeach.gov/economicdevelopment/ or follow us on Twitter @LBEconDev and Facebook.