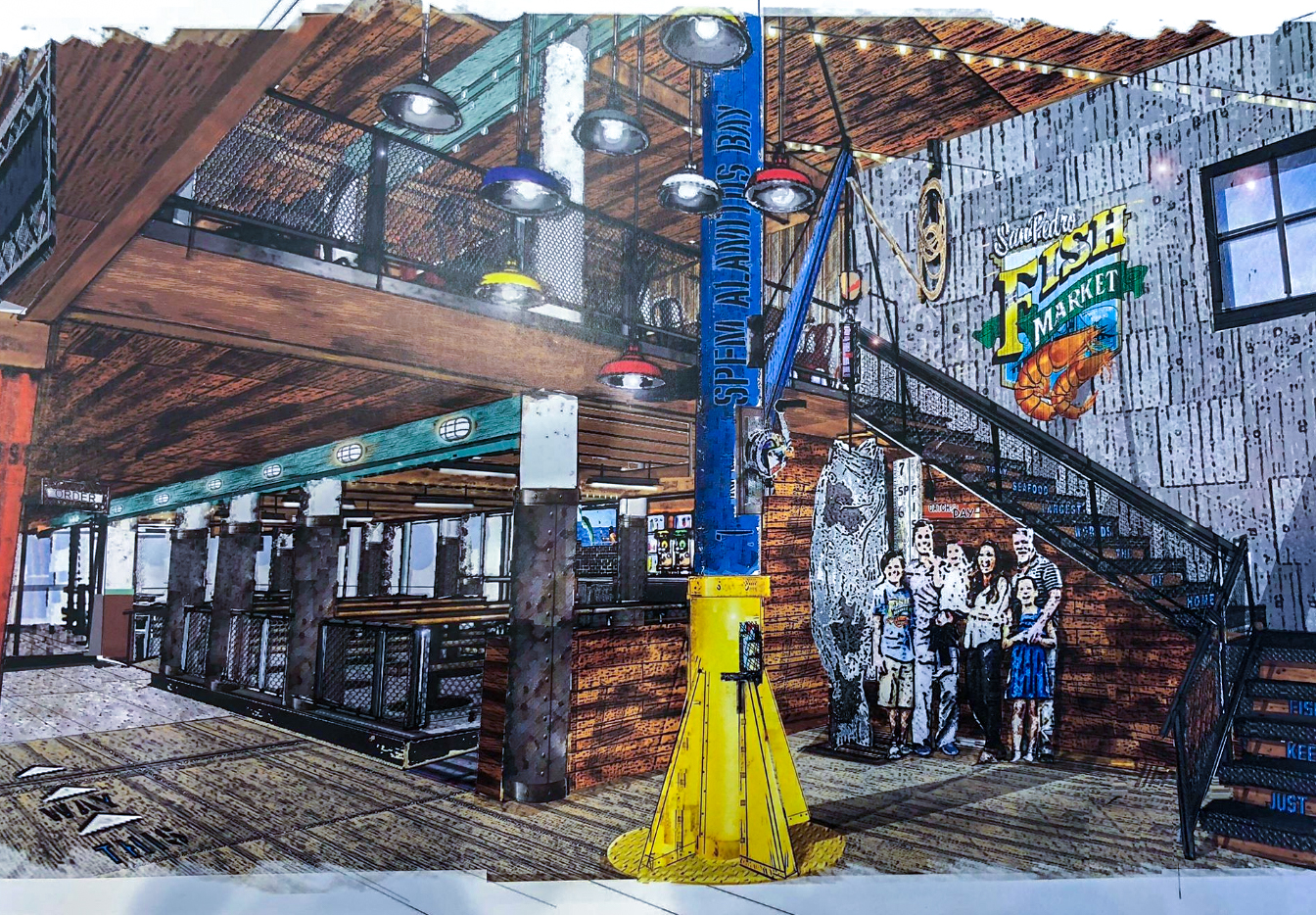 Mike Ungaro’s San Pedro Fish Market, open since 1956 and on the waterfront since 1957, is the stuff of legend. The state’s largest seafood restaurant, it heaps piles of shrimp, mussels, clams, octopus, lobster, calamari, halibut, crab, and scallops for your gluttonous delight. Hell, it’s even spawned wannabe versions of its platter in Irvine (though there is no comparison to the OG version).

In fact, between it and the Crusty Crab—the other restaurant that’s in San Pedro’s famed Ports O’ Call complex in the Port of Los Angeles, now undergoing a massive $100 million renovation with the Fish Market being the sole survivor—they served 1.1 million people every year.

And now, after opening a fast-casual spinoff of the market in Rolling Hills Estates, Ungaro is moving forward with a full-fledged second location right here in Long Beach along Alamitos Bay, replacing Joe’s Crab Shack at 6550 Marina Dr.

Renderings reveal an homage to the Ports O’ Call origins of the market—metal and wood beams harken to the docks and ships that made the sea village a destination for millions—while adding contemporary flair with clean architectural lines, a second-floor seating area, and pops of color.

“Plan is to open by the end of the year—hopefully sooner,” Ungaro said.

According to Ungaro, one thing will not change at the Long Beach location—and that’s its accommodation of the San Pedro Fish Market’s style of delivery: Pick your seafood, tell ’em how you want it cooked, pick some toppings, and take your tray of oceanic culinary wonders to a table to indulge.

One of our go-to faves? Its famed tray of jumbo shrimp with potatoes, peppers, and yes, an entire loaf of fresh bread to soak up the juicy runoff. (Speaking of shrimp, the Market garnered social media attention unlike any other after the launch of its “World’s Largest Seafood Tray” last year that featured more than 50 pounds of shrimp alone. Oh, and they also fry sheepshead fish to a damn perfection.)

If I can offer one suggestion to Ungaro, it would be to somehow include the tiny candy stand at Ports O’ Call that sells some of the best homemade Mexican candies this side of Boyle Heights. Yes, even after the seafood, some camote (candied sweet potato), cocada (coconut candy), and the best Mexican fudge ever, jamoncillo de leche.

Welcome to Long Beach, San Pedro. Our arms and bellies are open.