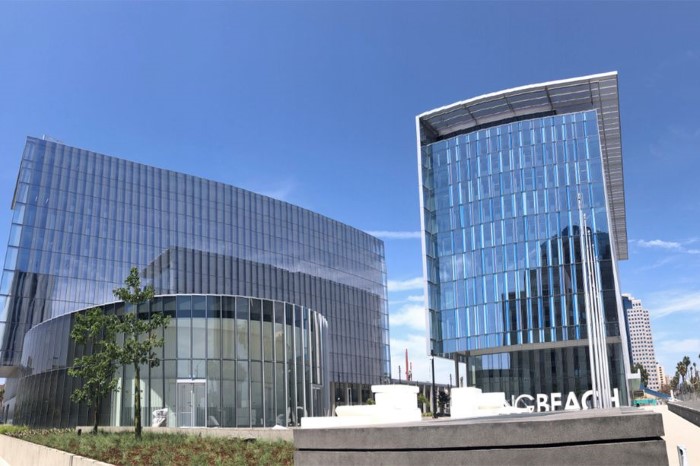 Long Beach’s new Civic Center is preparing for a grand unveiling later this month, but construction has officially wrapped up on the new complex.

Clark Construction Group, which built the project, announced Wednesday that the four-building project is ready. The development includes a new city hall building and a headquarters for the Port of Long Beach on the former site of the Long Beach Courthouse.

The complex also includes a new main library which is scheduled to open in September. A revamp of Lincoln Park is also part of the project, but it will be completed at a later date. Public plazas and pathways to link the new buildings are also incorporated.
The buildings span multiple blocks and meet LEED Gold standards with rooftop solar panels and rainwater capture systems.

The new civic center development, designed by SOM, took nearly three years to build and cost $520 million, according to information provided by Clark.
The transformation of Long Beach’s existing civic center, a plaza filled with hulking Brutalist buildings that date to the 1970s, isn’t yet complete.