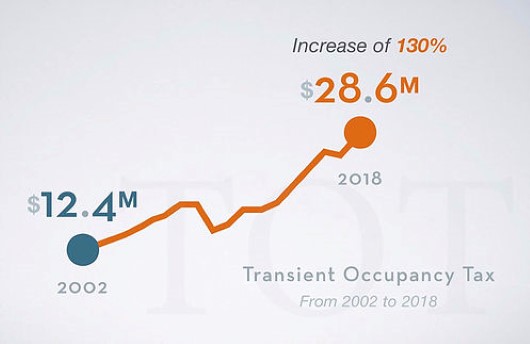 Hospitality Industry A Big Plus For City Coffers - Local Hotels Bring In A Record $28.6 Million In Transient Occupancy Tax

More than 200 people turned out to show their support for the Long Beach Area Convention & Visitors Bureau (CVB) as the organization made its annual presentation before the Long Beach City Council on October 2. The nonprofit organization, which runs the Long Beach Tourism Business Improvement Area in downtown and markets the city as a convention and tourism destination, announced that in fiscal year 2017-2018 ending September 30, hotels brought in a record level of transient occupancy tax (TOT): $28.6 million. That’s an 8% increase from the previous fiscal year and a 130% increase since 2002.

The CVB outlined its accomplishments and those of the hospitality and tourism industry over the past year, as well as challenges presented by heightening competition. In an interview with the Business Journal, CVB President and CEO Steve Goodling noted that TOT – the room tax charged by local hotels – increased by $2 million in fiscal year 2017-2018 compared to the prior fiscal year.