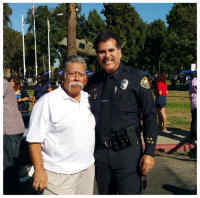 
On Saturday November 22, 2014, Robert G. Luna will be sworn in as the 26th Chief of Police for the City of Long Beach. Members of the public are invited to attend the free ceremony, which will begin at 12:00 pm in the Long Beach Arena Lobby. The celebration will mark the promotion of a Long Beach Police Department veteran and the City's first Latino Chief of Police.

"Over his 29 years on the force, Robert Luna has gone above and beyond the call of duty," said Mayor Robert Garcia. "He has demonstrated an abiding love for the City of Long Beach, its people, and its diverse neighborhoods. He is at the vanguard of policing and represents a diverse citizenry and leadership that make us all stronger."

City Manager Pat West appointed Chief Luna to the position on Tuesday November 11, 2014. Over the course of his career at the Long Beach Police Department, Chief Luna has served in a variety of roles, including 13 years on the executive management team, and most recently serving as Deputy Chief of Police. The community is invited to witness the swearing in with a welcome provided by Sheriff-Elect Jim McDonnell, remarks from the Mayor and City Manager, as well as light refreshments.

Chief Luna holds a Master of Public Policy and Administration, and a Bachelor of Science both from California State University, Long Beach. He is a graduate of Harvard University's Senior Executives in State and Local Government program; the Delinquency Control Institute (DCI) at the University of Southern California; and the FBI's National Executive Institute and National Academy.

“I am grateful for the opportunity to give back and serve the community that has given so much to me,” said Chief Luna. “The community is our greatest asset, and I want to make clear the Police Department will be as visible, accessible, responsive and transparent as possible. I look forward to being sworn in with my family, friends, colleagues and the community present.”

For more information, contact LBPD Media Relations at 562.570.5273 or LBPDMediaRelations@longbeach.gov