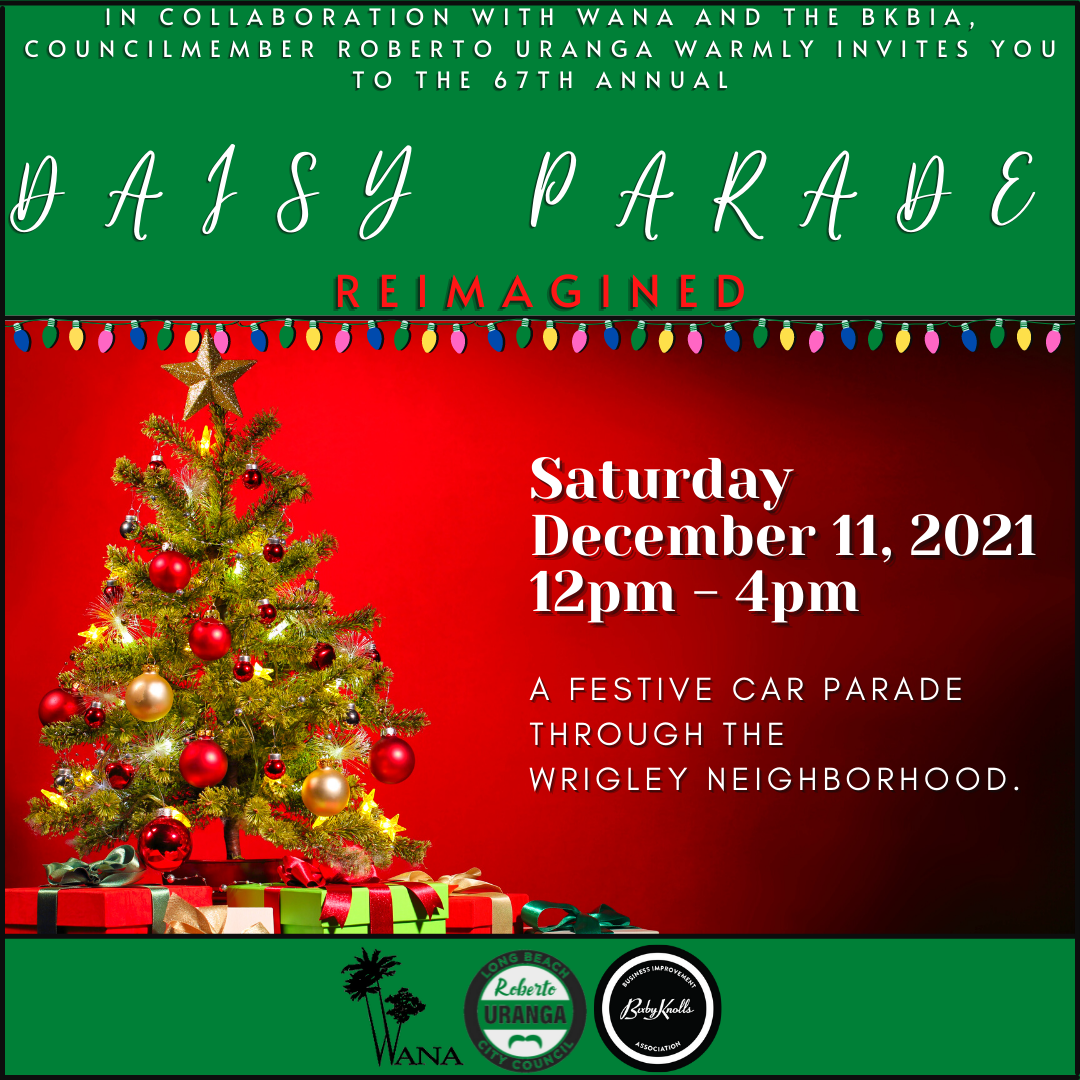 
In partnership with the Wrigley Area Neighborhood Alliance (WANA) and the Bixby Knolls Business Improvement Association (BKBIA), City Council District 7 is happy to announce the 67th Annual Daisy Lane Parade: Reimagined. To ensure safety and in order to be in compliance with state and local health guidance, the parade will be a bit different this year: a shortened parade line-up will follow a snaking path through the Wrigley Neighborhood, bringing the parade directly to the residents of Wrigley.

The reimagined parade will be inclusive of the original parade route, and the Daisy Lane Parade decorations will be placed on the Daisy Median. The parade route will be bounded by Wardlow Road and Pacific Coast Highway on the North and South, and Magnolia Avenue and the Los Angeles River on the East and West. The event will take place on Saturday, December 11th, from 12:00 PM to 4:00 PM.

“I am very happy to see the Daisy Parade return for its 67th year, and I am glad we have found a way to ensure residents can enjoy the parade safely,” said Councilmember Roberto Uranga. “As a longtime resident of the Wrigley neighborhood, my family has taken part in many memorable editions of the parade, and I look forward to making new memories this year.”

“When we were asked to help organize the ‘mobile’ Daisy Lane Parade, we jumped at the chance,” said Blair Cohn, president of the BKBIA. “My family used to visit Daisy Lane when I was a child and it was magical. We have organized this style of the parade in Bixby Knolls over these past two years, and it has been a great success. We are happy to do the same in the Wrigley neighborhood and keep this important tradition alive.”

The Daisy Lane Parade began in 1953 as the brainchild of Gertrude Whittle, who worked with the Long Beach City Council and Council of Churches to help decorate the grass median on Daisy Avenue with a Christmas Village and nativity scene. Today, the parade is stewarded by the Wrigley Area Neighborhood Alliance and Maria Norvell, who is fondly known as the Mother of Christmas Tree Lane.