Six months after the launch of the inaugural My Brother’s Keeper (MBK) Youth Leadership Program in January 2018, the Department of Health and Human Services (Health Department) Office of Equity wrapped up the Program with a presentation to City Council where participants from the MBK Youth Leadership Program showcased their training, teambuilding, and outreach efforts.

“I would like to thank the My Brother’s Keeper Alliance for their support and our Office of Equity team for their hard work in making the first Long Beach MBK Youth Leadership Program possible,” said Mayor Robert Garcia. “This is a great youth empowerment initiative, and I am excited to see the amazing things that these young leaders will go on to do.” 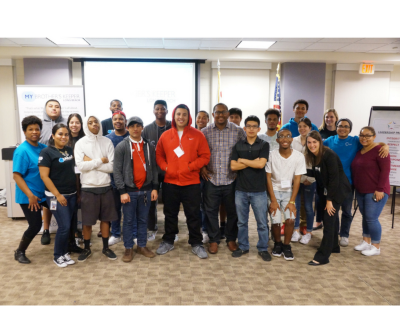 The Health Department received a $100,000 grant from the My Brother’s Keeper Alliance (MBKA) to support the City’s MBK Initiative, as well as to establish the City’s first-ever MBK Youth Leadership Program.

Vice Mayor Rex Richardson praised the MBK Youth Leadership Program, calling it “an amazing opportunity for young people from across Long Beach to learn the skills they need to be a voice for change in their communities.” Vice Mayor Richardson further stated that, “this is an important step toward building a youth voice in the decision-making process for our City.”

The MBK Youth Leadership Program staff recruited a cohort of local Long Beach youth, ages 16 to 20, from schools across the city. Throughout the six-month program, participants met bi-weekly and developed their skills in leadership and public engagement, and conducted outreach to over 300 of their peers on the health and equity issues that are most important to them. Upon completion of the Program, each youth participant received a $500 stipend for their hard work and outreach efforts.

“This program helped me learn about our community and the people in it, and actually being involved in that helped me feel like I’m a part of the City,” said Christopher Zarate, MBK Youth Leadership Program participant.

Joshua Garibay, another participant of the Program, stated, “I liked that we were able to talk about problems happening in our community and see how we’re able to solve them and make them better.”

For more information about MBK, those interested can email: MBKLongBeach@longbeach.gov.

About My Brother’s Keeper Alliance

To ensure all young people can reach their full potential and to inspire and empower the next generation leaders, the work started by My Brother’s Keeper Alliance now continues as a project of the Obama Foundation.