The Long Beach Police Department (LBPD) screened 517 vehicles while conducting a DUI/Driver’s License checkpoint on March 16, 2019. There were no DUI arrests, however seven citations were issued including three for unlicensed driver. The checkpoint was at Ocean Boulevard and Cherry Avenue between the hours of 6:00 p.m. and 2:00 a.m.

One difference that was noticed during this checkpoint was an increase in taxis and ride share vehicles, such as Uber and Lyft.

DUI checkpoints are placed in locations based on collision statistics and frequency of DUI arrests. In 2018, LBPD investigated 103 DUI collisions that resulted in the death of 10 people and injured 151 others.

Drivers caught driving impaired and charged with DUI can expect the impact of a DUI arrest to be approximately $13,500. This includes fines, fees, DUI classes, license suspension and other expenses not to mention possible jail time.

LBPD reminds drivers that “DUI Doesn’t Just Mean Booze.” Prescription drugs, particularly those with a driving or operating machinery warning on the label, can impair and result in a DUI. Marijuana can also be impairing, especially in combination with alcohol or other drugs.

LBPD will be conducting another DUI/Driver’s License checkpoint and/or DUI saturation patrol in the near future in our ongoing commitment to take suspected impaired drivers off our streets and highways, ultimately lowering the risk for deaths and injuries.

Funding for this checkpoint was provided by a grant from the California Office of Traffic Safety, through the National Highway Traffic Safety Administration. 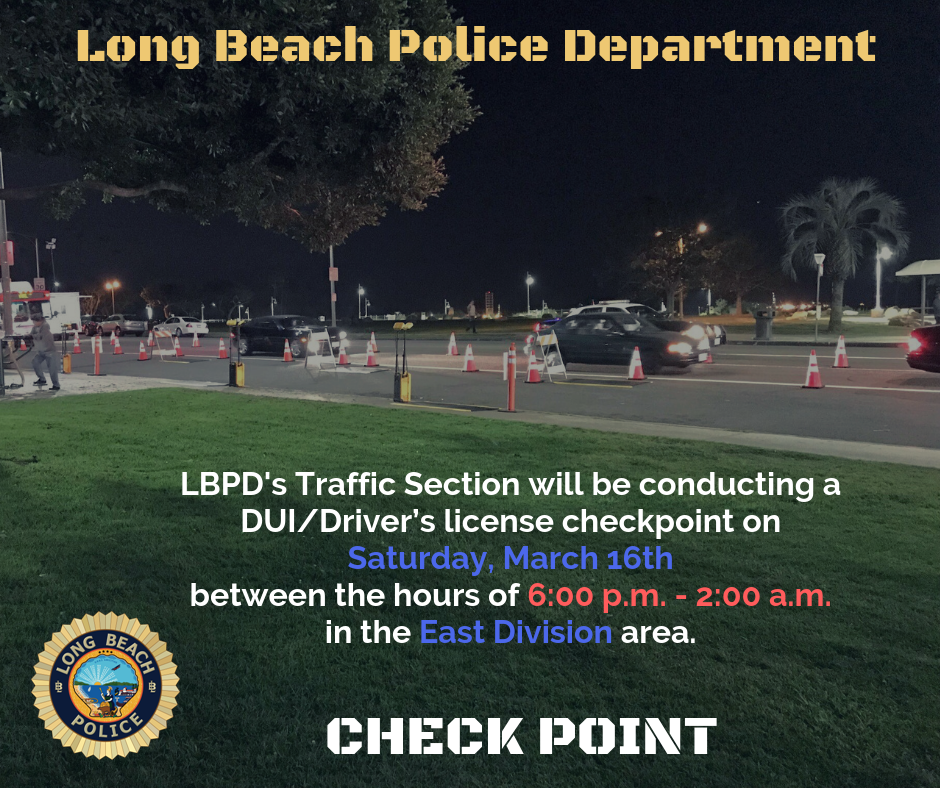 The Long Beach Police Department’s (LBPD) Traffic Section will be conducting a DUI/Driver’s License Checkpoint on Saturday March 16, 2019, between the hours of 6:00 p.m. to 2:00 a.m. in East Division area.

In recent years, California has seen a disturbing increase in drug-impaired driving crashes. LBPD supports the new effort from the Office of Traffic Safety that aims to educate all drivers that “DUI Doesn’t Just Mean Booze.” If you take prescription drugs, particularly those with a driving or operating machinery warning on the label, you might be impaired enough to get a DUI. Marijuana can also be impairing, especially in combination with alcohol or other drugs, and can result in a DUI.

The deterrent effect of High Visibility Enforcement using both DUI checkpoints and DUI Saturation Patrols has proven to lower the number of persons killed and injured in alcohol or drug impaired crashes. Research shows that crashes involving an impaired driver can be reduced by up to 20 percent when well-publicized proactive DUI operations are conducted routinely.

DUI Checkpoints like this one are placed in locations based on collision statistics and frequency of DUI arrests, affording the greatest opportunity for achieving drunk and drugged driving deterrence. Locations are chosen with safety considerations for the officers and the public.

In California, alcohol involved collisions led to 1,155 deaths and nearly 24,000 serious injuries in 2014 because someone failed to designate a sober driver. Over the course of the past three years LBPD officers have investigated 1,024 DUI collisions, which have claimed 10 lives and resulted in another 392 injuries.

Officers will be looking for signs of alcohol and/or drug impairment, with officers checking drivers for proper licensing, delaying motorists only momentarily. When possible, specially trained officers will be available to evaluate those suspected of drug-impaired driving, which now accounts for a growing number of impaired driving crashes. Everyone should be mindful that if you’re taking medication – whether prescription or over-the-counter – drinking even small amounts of alcohol can greatly intensify the impairment affects.

LBPD offers these reminders to ensure you have a safe night of fun that doesn’t involve a DUI:

People are encouraged to be a part of the designated driver very important person (“DDVIP”) program. As a DDVIP, you can ensure those drinking get home safely and get rewarded for it. Partnering bars and restaurants statewide have created non-alcoholic specialty drinks (“DDrinks”) for sober drivers: http://bit.ly/OTSDDrinks.

Getting home safely is cheap, but getting a DUI is not! Drivers caught driving impaired and charged with DUI can expect the impact of a DUI arrest to be upwards of $13,500. This includes fines, fees, DUI classes, license suspension and other expenses not to mention possible jail time.

Funding for this checkpoint is provided to LBPD by a grant from the California Office of Traffic Safety, through the National Highway Traffic Safety Administration.