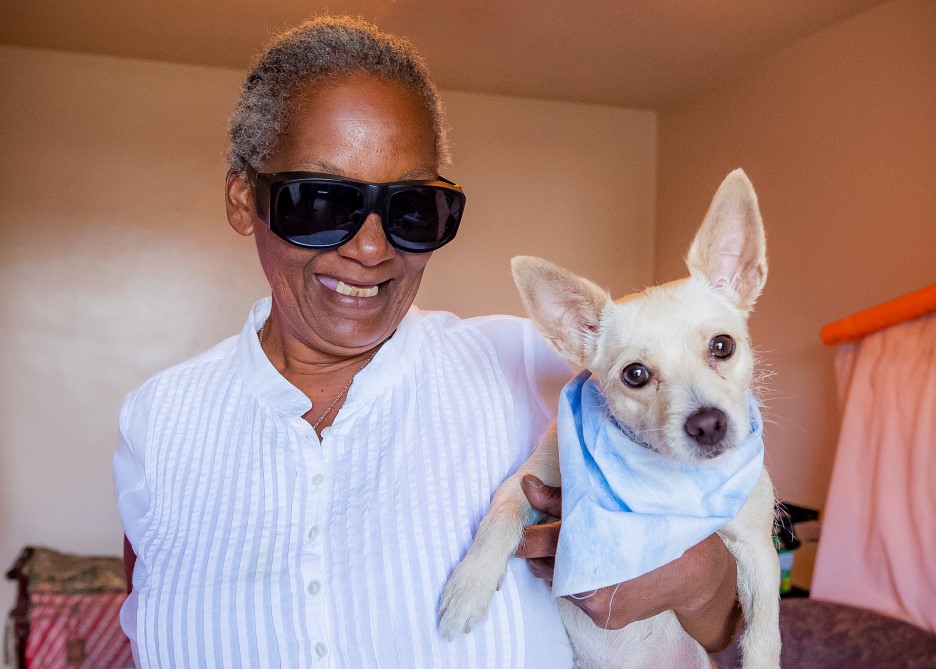 Woman With Disability Escapes Homelessness After Two Years On The Streets

Long before she had a stable roof over her head, Tyletha was on the streets for nearly six years.

And unlike most myths that surround homelessness, her story was not one rooted in drugs or addiction or a lack of drive; it was driven by exorbitant loss.

Not much longer after she lost her father, Tyletha lost her daughter after a drunk driver slammed into her only child.

52 years old, legally blind, facing multiple health concerns including multiple sclerosis and dependent on her daughter for support, Tyletha’s life took a downward spiral that eventually led her to losing her home; and as a senior, she was not able to afford anything more than a few nights in a motel, and began facing life on the streets of Carson and Long Beach.

In her condition, vulnerability increased exponentially, leading to constant harassment—from both aggressive passersby, other individuals experiencing homeless, and even law enforcement officials—which prompted her to seek shelter and defend herself, including taking drastic measures such as carrying bottles of bleach to spray at people attempting to take advantage of her and her lack of sight.

“It’s not a part of my life I like discussing—being called ‘The Bleach Lady,’” Tyletha said. “Before Christopher [Roth, a Long Beach Police Department officer] and Lucinda [Hayes, an Outreach Coordinator for the City of Long Beach], I don’t know what I could have done without them… I really don’t know.”

The role of Christopher and Lucinda proved beyond instrumental; they were essential cogs in the ability to get Tyletha into stability.

For Tyletha, there was a distrust with society: aging, disabled and having faced deep anxiety with the loss of her family structure’s backbone, society had ultimately failed Tyletha by having no support for her when she needed it most. To suddenly have that societal support return to her life—in this case, by way of Christopher and Lucinda—and ask her to entrust them with returning her to stability is, by no means, a walk in the park.

It wasn’t until another year after that—two years in total—that Tyletha would have the ability to step inside a housing unit that was subsidized for her. For stories like that of Tyletha’s, there are a plethora of City and County resources and departments—the Long Beach Police Department, the Multi-Service Center, the Parks, Recreation and Marine Department, the Department of Health and Human Services, transit authorities, and numerous volunteers all came together to form a conglomerate of resources known as the Interdepartmental Team (IT). This IT then works collectively to view homelessness in a systematic way by meeting each month, discussing particularly cases, progress and overall goals, creating a multi-pronged approach that understands homelessness is not about just providing services and scoring housing.

On top of this, Tyletha’s physical ailments were taxing—but thanks to the dedicated work of a crew of doctors, nurses, surgeons, and supporters that saw her often, Tyletha was encouraged to continue fighting in search for permanent housing and a stable living situation.

“Sometimes, I felt like giving up—I really did because it’s hard to trust people,” Tyletha said. “I’m not talkin’ [about] people who do drugs or anything like that… I am talkin’ about people like me. I was failed once; I was afraid I would find myself alone and on the streets again, y’know? But Dr. [Tuan] Lam, my eye surgeon, he would consistently tell me, ‘Be patient, work with the program to make it work.’”

In other words, the balance between wanting to seek help and genuinely seeking it is not an endeavor that rests solely on the homeless individual but a back-and-forth between the individual and society, services and searching, patience and hope.

“I used to be one of those people, y’know, one those people who saw homeless people on the street and I would think, ‘Why can’t they get a job? Why can’t they help their situation?’” Tyletha said. “I used to be like that… And then I became that person. And it took two years—two years—before I ever stepped into my own place again. It wasn’t because no one was helping me or I wasn’t helping myself—that’s just the process. It isn’t easy.”

This lack of knowing the process, a process that Tyletha admitted she was initially ignorant of before she began experiencing homelessness herself, fuels misconceptions about who homeless folks are and what is being done to solve it at a local and societal level.

There is a constant mix of persistence and patience that is exercised on the daily to assure that we, as a group of humans connected by geography, are doing what we can to help those who need it most.

When it comes to those who directly helped Tyletha, it was more than a job; it was connecting with a fellow human, learning her story and seeing her succeed in a way that everyone who got to know her knew she could achieve.

“I step into her new place and, yeah, I get deeply emotional,” Lucinda said. And amidst laughs from Tyletha and tears from Lucinda, she continued: “If you were sitting next to us at her house, you would notice her house is spotless—for a lady that can’t see, her house is impeccable. There’s fruit on the counter. There’s a table with four chairs. She has her little dog… She has a life. And that made two years of hard work worth every second and then some.”